WACKY WEDNESDAY: In Praise of The Dead Milkmen

Yesterday I saw an item on the Dangerous Minds blog about a "feud" between The Ramones and Sha Na Na. That in itself would make a good Wacky Wednesday. But they had it first.

While reading the post I couldn't help but notice an air of condensation on the part of writer Christopher Bickel toward Bowzer and the boys. 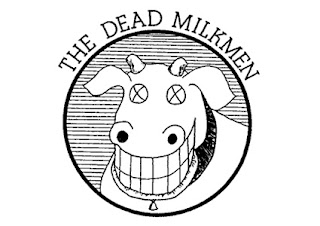 And the first thing to cross my mind was I know a band who would disagree ...

That of course is The Dead Milkman, whose song "In Praise of Sha Na Na" has been a favorite of mine since I first heard it 25 years ago.

Sha Na Na were the kings of Woodstock
You know, it's true deep in your heart
Greasy guys in gold lame
If only Hendrix had been so smart
And remember ...
You can move to Montana

And listen to Santana

But you still won't be

As cool as Sha Na Na

So take that, Dangerous Minds!

Of course this got me thinking about what an under-appreciated band The Dead Milkmen is.

These Philadelphia group got together in the early '80s, playing a light-hearted, if often fierce brand of punk rock. They rose, they thrived for awhile, and they even played the old TAC Club in Santa Fe sometime in the mid '80s. (Another storied local show I missed!) They broke up in 1995 but reformed, with three of the four original members, back in 2007 or '08.

Here's a song that actually got played a lot on MTV in the late '80s. (I still think it's cool rhyming "punk rock girl" with "Minnie Pearl," but it took me a couple of years to learn to overlook the fact that "California Dreamin' " is not a Beach Boys song.)

Here is another early Milkmen classic

Here's one from their latest album, Pretty Music for Pretty People. In case you don't know who the Black Dahlia is, get thee to an Ellroy novel!