WACKY WEDNESDAY: In Praise of The Maddox Brothers & Rose 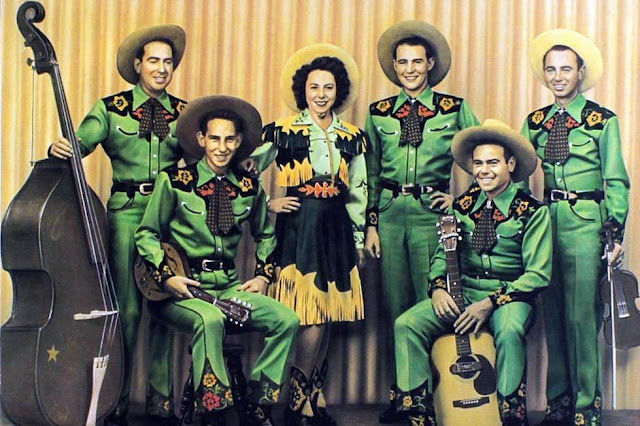 I've been enjoying Ken Burns' Country Music documentary series on PBS.  But one thing I'm not enjoying is the never-ending bitching on social media about artist Burns didn't cover, or cover enough. (I'm about half way through it it, so if, by the end I don't see anything on The Waco Brothers or The Hickoids, I might join in the whine-fest.)

But til then, let's look at the doughnut and not the hole. There are many great country musicians to whom Burns devoted precious footage who aren't very well known to modern ears, and one such act is the band known as The Maddox Brothers and Rose.

Fred, Cal, Cliff, Don, "Friendly" Henry (the working girl's friend) and little sister Rose Maddox brought the boogie to country music, basically playing rockabilly decades before anyone ever heard of rockabilly. Mixing honky-tonk, a little bluegrass, some R&B -- and almost always irreverent humor -- they provided good times and great sounds for the Okies who had migrated to California during the Great Depression. They also were forerunners of the Bakersfield sound and inspirations to the likes of Merle Haggard and Buck Owens (who recorded several duets with Rose in the early '60s.

Though they called their style "Okie boggie," the Maddox clan was from Alabama. The whole family walked, hitchhiked and hopped trains to Modesto, Calif. in 1933.

In 1939 they drove their Model A to the Sacramento State Fair and entered a hillbilly band competition. The Maddox siblings took the stage and ripped through “Sally Let Your Bangs Hang Down,” with hard-driving rhythms and raunchy lyrics, and tore up the competition, officially winning the title “California’s best hillbilly band.” After that, the family performed at rodeos and in honky tonks up and down the West Coast. Rose, only 12 at the time, performed in bars, despite rules that no one under the age of 18 could enter. During that period, she heard Woody and Jack Guthrie perform “Reno Blues”—a song she later remade into the group’s biggest hit, “The Philadelphia Lawyer.”

When Don and his brothers returned from military service in 1946, the band reformed. Dressed in gaudy, brightly colored costumes made by North Hollywood tailor Nathan Turk, the Maddox Brothers and Rose called themselves “America’s Most Colorful Hillbilly Band” and were known for their high-energy performances – with hollers, spoken asides, and brother Cal’s crazy laughter. Don became the comic of the group and developed a confident “Don Juan” persona. His screeching “mule” fiddle became an integral part of the Maddox stage show.

Here's the song that won them that contest in Sacramento:

This is the song that made me a fan after hearing it on KUNM's Home of Happy Feet years and years ago.

Most of us are familiar with this kind of blues

And here's an oddity from 1956 I just stumbled on. I'm not sure why they renamed "I Got a Woman" to "The Death of Rock and Roll." I just hope Ray Charles got some royalties.