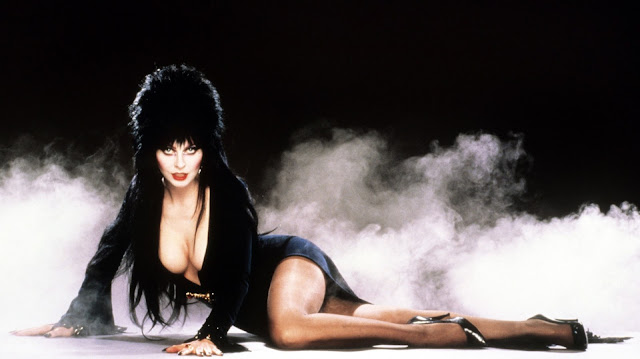 Yes it's a week before Halloween, so let us now praise famous vamps ... namely Cassandra Peterson, better known as Elvira, Mistress of the Dark.

Back in the early '80s she starred in the  Elvira's Movie Macabre, a Los Angeles-based syndicated horror movie shows that featured Peterson in her most famous role as the sexy vampire girl in the low-cut black dress. She offered commentary and bad puns during breaks. And by the end of the decade she seemed to be everywhere.

Elvira’s reign as ‘Queen of Halloween’ has spanned more than three decades and includes an IMAX movie, music CDs, books and more than a thousand licensed products.  She co-wrote and starred in the feature films Elvira, Mistress of the Dark and Elvira’s Haunted Hills.

And she also sings. So here's a musical tribute to the Queen of Haalloween.

Most of these are from the early-to-mid 80s, so pardon the cheese:

Elvira also is a rapper

And this one is featured on my latest Big Enchilada podcast!