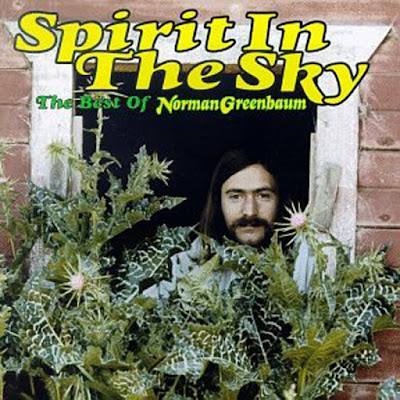 Greenbaum nearly went to that spirit in the sky in 2015 when he was critically injured in an auto accident in Santa Rosa, Calif. But he survived and has performed since then

As I've written here before, most people who remember Greenbaum, know him for his 1969 hit, which decades later was used in movies like Apollo 13, Wayne's World 2 and Sunshine Cleaning, tv shows including Law & Order, House and Big Love and even commercials for Gatorade, Nike, American Express and HBO.

But a few years before "Spirit" he had a novelty hit called "The Eggplant That Ate Chicago" with his neo-jug band, Dr. West's Medicine Show & Junk Band.

I was in junior high in Oklahoma City at the time. My favorite radio station, WKY had a contest to draw the invasive eggplant, and I was one of the winners. My prize was the Dr. West album. This album inspired my brother and me to form our first band, The Ramhorn City Go-Go Squad & Uptight Washtub Band.

We covered several Dr. West songs, including "Eggplant," though we never quite nailed that one.

Here are a few of the Dr. West songs we loved so well. (and you can find more HERE)

To appreciate Dr. West's Medicine Show & Junk Band. you had to be at least little weird


What can you say about the modern-day fish?