King Shark in the Studio

The popular image of reggae recording sessions for most laymen probably involves a lot of dreadlocked musicians with red eyes smoking sweet, pungent spliffs the size of their forearms. I'm not saying that stereotype isn't based on the truth, but it's not what I found last week when I dropped in on a King Shark recording session at The Kitchen Sink Recording Studio in downtown Santa Fe last week.

There was Manson, a longtime Santa Fe musician who owns and operates the studio, with Shark, aka Alphanso Henclewood, hunched over the recording console.They weren't actually recording while I was there, just goosing and tweaking a couple of songs.

Behind them, on a comfortable sofa, was Shark's friend and employer, Nancie Brodhead, who earlier that day had recorded vocals for a track Manson was playing back. I didn't immediately recognize the song, though it came to me when they they got back to the chorus:

The arrangement might not be what Les Brown & His Band of Renown had in mind back in 1945 when they recorded it with a vocalist Doris Day. But it works as a reggae song.

Later in the afternoon Shark and Manson worked on another tune, this one with Shark on vocals. It was the old Smokey Robinson hit "Cruisin'," a song Shark's loved since he was a young man in Jamaica.

Shark's version of this song features a myriad of instrumental tracks Manson was bringing up in the mix, including an acoustic guitar (in which I think I heard flamenco overtones), a lone violin and electric guitar by longtime Shark crony  Earl “Chinna” Smith, a reggae monster whose résumé includes session work with Bob Marley, Bunny Wailer, Jimmy Cliff, Burning Spear, Lee “Scratch” Perry and King Tubby. 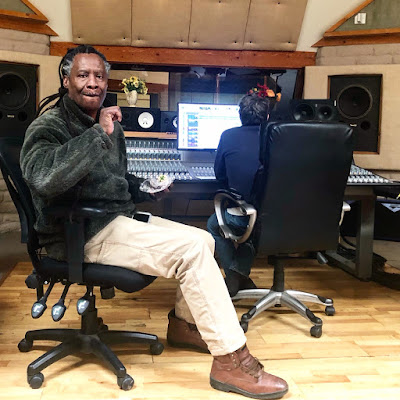 As may be obvious from those songs I mentioned, Shark is working on an album of cover songs, done in his roots reggae style. Most of the instrumental tracks were recorded in Jamaica, some of them years ago.

The Shark Who Would Be King: The singer was born 62 years ago in the Greenwich Farms district of Kingston, Jamaica. It’s a fishing community, but it has also produced way more than its share of musicians, including Chinna and Shark.

Shark first came to the U.S. in the mid '80s, after a stint in Toronto. He moved to New York City in 1984 (and lived there at the same time Manson was living and gigging there -- though the two didn’t know each other during that time.)

About 20 years ago Shark left New York and ended up in Santa Fe, Here he  started a band called King Shark Solutions and established his record  company, Montego Records. In 2000, Montego released the first of several reggae compilations, King Shark and All Star Friends, which was recorded in Jamaica featuring tracks by artists like Prince Alla, (Keith Blake), Vicious Irie and Shark himself.

Though he moved from Santa Fe to Dallas several years ago (to sing with a band called Irie Connections), the king returned in 2010, settling down in the Pecos area, where he's been ever since.

Through the years he's given me a lot of music, much of which I've reviewed and plugged in my old column at The New Mexican and played on the radio. I don't know when the covers record will be finished, but I'm looking forward to hearing it.

Until then here are a couple of King Shark tunes from recent years.

"Walk in the Light" was released about a year ago.

And this one is a few years older


Montego Records can be found HERE