The Fabulous Soundtrack of the First Newspaper Story I Ever Published 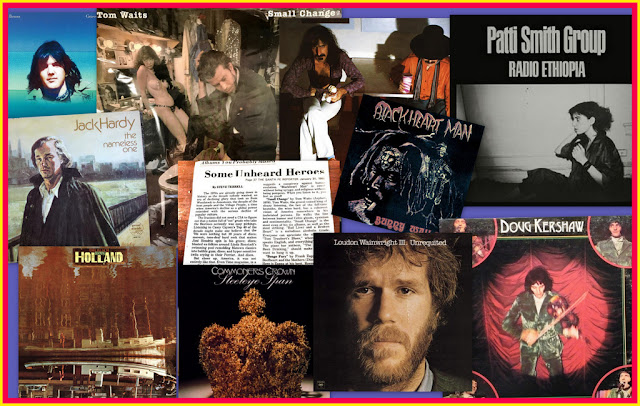 Forty years ago last Friday, Jan. 31, 1980,  The Santa Fe Reporter was crazy enough to publish an unsolicited story from a local barroom singer who arrogantly assumed that everyone in town would be interested in what he had to say about the music of the previous decade.

Yes, that previously unpublished writer was me. That was the start of my four-decade career in journalism, from which I retired last November.

That story the Reporter published (on page 27) was under the headline "Some Unheard Heroes" was "inspired" by Time magazine's end of the decade feature listing its favorite albums of the '70s. I've long forgotten what records made that list, but I remember being very underwhelmed. I decided to make my own list "of 10 great but unacclaimed albums" of the Me Decade.

Below are songs from all those records, starting with one from Holland, which I still believe was the last good album by The Beach Boys. Though the best song there definitely was "Sail On Sailor," here's a more obscure one, a weird ode to a New Age princess, "Funky Pretty."

Though it was panned by most "serious" critics, Radio Ethiopia still is my favorite Patty Smith abum.

This is "Crime of Passion" by Loudon Wainwright III in his prime.

In retrospect, I probably like Steeleye Span's Below the Salt better than Commoner's Crown. But I still think it's cool they did this song with Peter Sellers (!) on the uke.

If I could go back in time just to see one concert, it probably would be Frank Zappa, the Mothers of Invention and Captain Beefheart at the Armadillo World Headquarters in 1975, as documented in the album Bongo Fury.

Though it never got any significant airplay on country radio, Gram Parson's posthumously released Grievous Angel  was a high water mark in country music.

OK, I'm cheating here. YouTube has only one song from Doug Kershaw's 1975 live album Alive & Pickin' and that's just a fairly forgettable instrumental called "Dixie Creole." The album's also missing on Spotify. So here's another live version of one of my favorite Alive & Pickin' songs, "The Stripper."

Finally, this one, from the late New York folkie Jack Hardy's excellent 1978 album, The Nameless One definitely is the most obscure one on this list. I'd read a review of it in Rolling Stone, which included Hardy's address. I wrote him and asked how to get a copy and he just sent me one.


I'll be doing a set with songs from all these tonight on Terrell's Sound World, 10 p.m. to midnight on KSFR, 101.FM in Northern New Mexico or www.ksfr.org