WACKY WEDNESDAY: You Is a Rat Fink 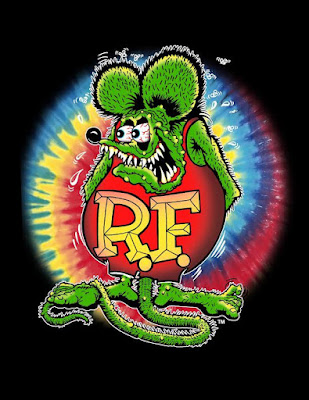 Whether he came into your life by way of custom hot-rod designer and cartoonist Ed "Big Daddy" Roth, song parodist Allan Sherman, TV personality Steve Allen, or a weird mid '60s B -- no, make that Z -- movie,  Rat Fink is an essential American icon we should keep close to our hearts.

I definitely fall into the Roth faction of the Rat Fink cult. From the moment I first purchased my Revell Rat Fink model kit -- and a tube of airplane glue -- I've been a Big Daddy devotee.

What led Ed to create the mighty rodent we know and love?

Tales of the Rat Fink, the 2006 documentary about Roth, with John Goodman providing the voice of Big Daddy,  quotes Roth: Disneyland had just opened down the street from me and everywhere you looked, kids were running around in those stupid mouse ears. I really hated that mouse. While waiting for a cheeseburger at my local greasy spoon, I was thinking about how much I hated Mickey Mouse. Then I started sketching my version of a cartoon mouse on a napkin. Hairy, stinky, bulging bloodshot eyes, saliva oozing, covered with flies, obnoxious. He was the anti-Mickey Mouse. I named him “Rat Fink, which was a phrase you heard on the Steve Allen Show. Whenever I looked at Rat Fink, I felt like I was looking at my inner self. The world my parents, teachers and responsible-type people belonged to wasn’t my world. Why did I have to be like them? I didn’t. And somehow Rat Fink helped me realize that.


But the first known song about Rat Fink came from Allan Sherman on his album My Son, the Nut. That came out in 1963, the same year Roth's anti-Mickey and other bizarre Roth characters began appearing as Revell models.

After his funny hot rods, his cool cartoon monsters and that line of plastic models took off, Roth fronted a band (mainly studio pros) called Mr. Gasser & The Weirdos. And of course some of their songs were about Rat Fink. This is one of them.

Scooting ahead to 2006, The Sadies, a Canadian alt-country group did the soundtrack for that animated Big Daddy doc Tales of the Rat Fink.

I'm not exactly sure what this is, but I'm guessing Judy & The Loadies were more influenced by Ron Haydock than Ed Roth.

Finally, Allan Sherman's original song was covered in the late '80s by The Misfits