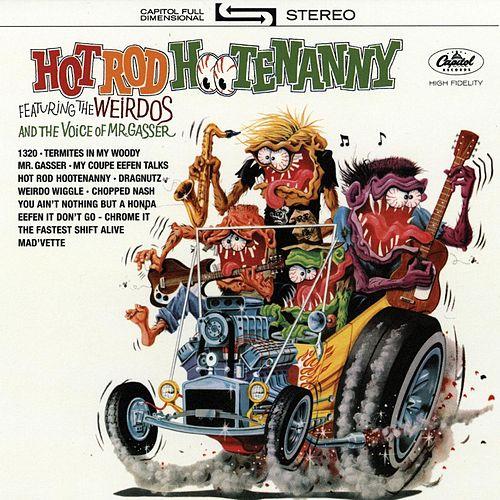 Some of the sweetest memories of my pre-teen years involve being lost in an airplane-glue haze building models. I loved the Aurora monster kits, -- and I once won a prize from a local hobby shop for my Mummy model.

But even more, I loved the Revell models from the Big Daddy Roth universe --- Mr. Gasser, Rat Fink, Drag Nut, etc. -- and their rivals, The Weird-ohs and their beach-loving cousins, The Silly Surfers from the Hawk Model Company.

One cool thing about both the Big Daddy Roth models and the Hawk models is that both had music to go along with them. In fact, the Roth-spawned Mr. Gasser & The Weird-ohs had three albums to their credit in the mid '60s.

Even as a kid I noticed that Gasser's band sounded a lot like The Weird-ohs (and The Silly Surfers.) That's because both fake groups were fronted an L.A, studio cat named Gary Usher.

By the time he got around to these bands Usher already had co-written songs with Brian Wilson including "In My Room." (Usher also was the brains behind The Hondells, who had a hit with the Wilson-penned "Little Honda." )

Let's hear some songs by these bands, starting with Mr. Gasser & The Weirdos, singing the title song of their first album, "Hot Rod Hootenanny."

As a kid, one of my favorite Gasser tunes was "The Ballad of Eefin Fink: "He's the hero of the story. But he's the villain too. So naturally the question is "Who?"

Back in the mid '60s I had a split LP of The Weird-ohs and The Silly Surfers. Here's a shoulda-been Weird-ohs hit called "Huey's Hut Rod."

Meanwhile, the best Silly Surfers tune was "Hodad Makin' the Scene With a Six Pack."

Back in the '90s, I thought I might be the last man alive who remembered this stuff. Then Pearl Jam went and covered this Silly Surfers classic

And 10 years ago, the Canadian group, The Sadies did a credible job in conjuring the airplane-glue rock spirit when they provided the soundtrack to the Big Daddy Roth documentary "Tales of the Rat Fink."