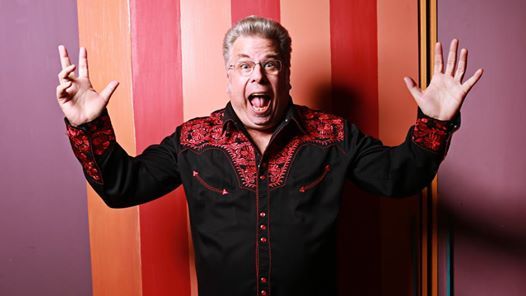 This Wacky Wednesday we celebrate the songs and career of Neill Kirby McMillan, Jr., better known throughout Christendom as Mojo Nixon.

To paraphrase The Dead Milkmen, if you don't know Mojo Nixon, then your brain needs fixin'.

Mojo recently announced that he's got a new 10-disc box set called The Mojo Manifesto that'll be released this month. Also coming is a documentary with the same title. (It was supposed to have premiered at the South by Southwest Film Festival this month, but something funny happened on the way to the festival.)

Here's a promo video for the doc.

I first encountered Mojo late one weekend night in 1987 while watching Night Flight on cable TV. That's when I first saw the video of "Elvis is Everywhere" by Mojo and  musical partner Skid Roper

I couldn't believe my ears. I soon became a dedicated acolyte of the Mojo Synod  of the Cult of Elvis.

Here are some of my favorite Mojo tunes.

Mojo and Skid dug Howlin' Wolf as much as they did Elvis.

In the early '90s, Mojo teamed up with Country Dick Montana and Dave Alvin to form The Pleasure Barons who made an album called Live in Las Vegas. When they played live in Santa Fe circa 1992, this crazed supergroup included John Doe of X, Rosie Flores and Katy Moffat. Here's the Barons' version of a Mojo classic.

In 1994 Mojo teamed up with Jello Biafra of the Dead Kennedys on an album called Prairie Home Invasion. This is my favorite song from that:

Finally, here's the song that made us all fall in love ...