UPDATED: ADDED THE THIRD HOUR TO MIXCLOUD.
LINK AND MEDIA PLAYER BELOW

Here's my playlist :
OPENING THEME: Let It Out (Let it All Hang Out) by The Hombres
Lost on Xandu by Lenny Kaye & The Fleshtones
Hey Gyp (Dig the Slowness) by The Ranconteurs
Obeah Man by Meet Your Death
You Can’t Judge a Book by Bo Diddley
Nervous Breakdown by Destination Lonely
Zombie Cop by Mean Motor Scooter
I Am Gonna Unmask the Batman by Lacy Gibson

Strange Life by X
She Only Loves My ’32 by Elvis From Outer Space
Norman Bates by The Tailgators
Fireflyby Southern Culture on the Skids
In a Young Man’s Mind by The Mooney Suzuki
Magic Potion by The Open Mind
I Kissed a Ghoul by Nekromantix
White Lightnin’ by The Big Bopper
Hope You Don’t Mind by Johnny Dowd
OPENING THEME: Let It Out (Let it All Hang Out) by The Hombres 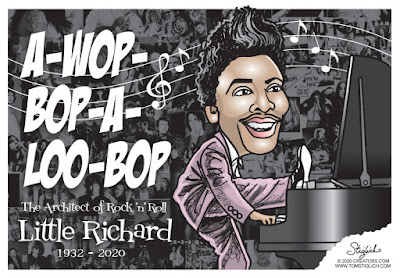 Heebie Jeebies by Little Richard
Long Tall Sally by Wanda Jackson
Tutti-Fruitti by MC 5
JennyTake a Ride by Mitch Ryder & The Detroit Wheels
I’m Just a Lonely Guy by Little Richard
Slipping’ and Sliding’ by The Band
Kansas City/Hey! Hey! Hey! by The Beatles
I Saw Her Standing There by Jerry Lee Lewis with Little Richard
Good Golly Miss Molly by The Sonics
Lucille by NRBQ
Rip It Up by Elvis Presley
Elvis is Dead by Living Colour
Groovy Little Suzie by Little Richard

Cherry Bomb by Joan Jett & L7
No Place in Space by The Scaners
How Can I Make Her Mine by Lyres
Gotta Get Fired by The Sloths
Blue Jean Vincent by Havana 3 AM
A Real Indication by Thought Gang
Booze Farm by Boris McCutcheon & The Salt Licks
They Crowned an Idiot King by Swamp Dogg
Jeannie’s Afraid of the Dark by Robbie Fulks
CLOSING THEME: Over the Rainbow by Jerry Lee Lewis

The third hour of this show is on Mixcloud. You can play it below: