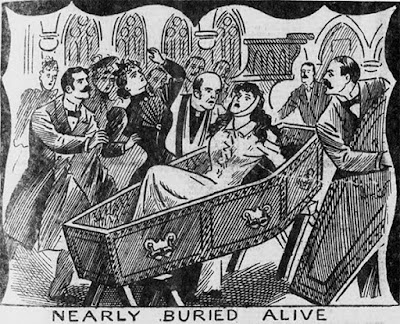 After nearly two months of COVID quarantine, I've heard (mainly read on social media) several people complaining that they feel like they've been "buried alive" by social distancing. A little overdramatic, but who am I to judge?

But that feeling of being "buried alive" is one that many a popular music composer has expressed through the past few decades. In fact, it's become one of the most overused metaphors in American music.

But again, who am I to judge?

Below is a small sampling of songs called "Buried Alive," some pretty cool, some pretty wretched. Don't whine if I left out your favorite. Start your own blog!

The first "Buried Alive" song I ever was aware of, an instrumental called "Buried Alive in the Blues" on Janis Joplin's posthumous album Pearl. (This also became the title of a biography of Janis by her sister Laura Joplin.)

If you look through YouTube, Spotify or the AllMusic Guide you'll see the title "Buried Alive" has mainly been used by metal bands. Here's a version by Black Sabbath. It originally appeared on their Dehumanizer album in 1992.

Speaking of classic rock, Ron Wood of The Rolling Stones did this "Buried Alive" on his 1979 solo album Gimme Some Neck.

Billy Idol apparently thought it was a nice day for being buried alive.

The Dropkick Murphys took the concept to Celt rock.