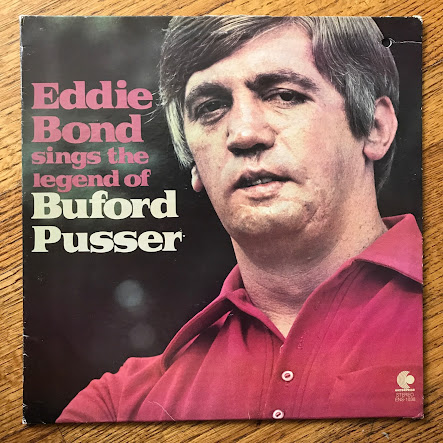 O.K., last Throwback Thursday I did a post in honor of of an infamous criminal, so this week, on Wacky Wednesday let's honor a legendary lawman, the late great Buford Pusser.
The corruption-busting sheriff was the hero of the film series Walking Tall. Here's what the New York Times said about him in his 1974 obituary:
Mr. Puser, elected sheriff of McNairy County in 1964, immediately started a crime‐busting clean‐up of gambling, prostitution and moonshining in the county. Often he personally smashed up gambling equipment, using a pick‐ax.

There were at least seven attempts on Mr. Pusser's life, including one in 1967 when he and his wife Pauline were driving along a country road near the town of New Hope. Their car was sprayed with 30‐caliber bullets, and Mrs. Pusser was killed.

... In addition to being shot at, Mr. Passer was knifed, beaten several times and, once, thrown from a window. He often related in kind, and in some quarters he was criticized for being too tough a law enforcement officer, tending, as one Tennessee newspaper put it, “to overkill in the pursuit of justice.”

He died in a traffic accident at the age of 36.
Not only did he inspire the movie but also several songs.
In fact, country singer Eddie Bond recorded a bunch of Buford songs, many of which are compiled on the 1973 album pictured above. Here a couple of those songs:
No bear was a match for Buford, according to Eddie Bond.
Another country singer named Dave Hall recorded this Buford tribute:

A band called State Line Mob (which also is the name of the criminal organization Pusser fought) did this tune in 2008:

The Drive-By Truckers did not one, not two, but three Buford songs on their their 2004 album (and my favorite DBT album),  The Dirty South. These include "The Boys from Alabama," "Cottonseed" and, my favorite, "The Buford Stick," sung from the perspective of a good old boy sick of the sheriff "shutting down our stills and whores."
Jimmy Buffet sang about a drunken altercation with Sheriff Pusser in his 1999 song "Semi-True Story." The inebriated Buffet had made the mistake of climbing on top of Pusser's car in a hotel parking lot in Nashville.
A walking tall sheriff and a big Cadillac
And me and golf shoes on the hood making tracks
This daring young singer was under attack
And Buford himself, when not busting up moonshine stills, wrestling bears, or beating up Jimmy Buffet , was a recording artist himself. Here's his two-part song "It Happened In Tennessee," released by a Stax Records (!) subsidiary. It was written and produced by Wayne Jackson.
Walk tall in Heaven, Buford!
at October 07, 2020