Goodness Gussie, it's the birthday of one of the most successful African-American songwriters of the 19th Century, the first Black Tin Pan Alley composers, Mr. Gussie Davis.
Though he died when he was just 35, many of his tunes lived on into the 20th Century and eventually were recorded by early country music stars. He also wrote a song that's become an American classic -- though Davis hasn't received proper credit for it. (Keep reading to the bottom.)
An article about the songwriter by Wayne Erbsen in Native Ground  quotes Tin-Pan Alley historian Maxwell Marcuse:
“Gussie Davis reached for the tender spots that lurk deep within all of us, no matter how thick or tough our outer crusts may be. In an era of ‘sing-em-and-weep’ melodies, Davis did more than his share to open up the tear ducts of America.”
Born in Dayton on Dec. 3, 1863, Davis wanted to attend the Nelson Musical College in Cincinnati. But his application to the school was rejected because of his race.

But, according to Eileen Southern in her 1997 book, The Music of Black Americans: A History, Davis found a workaround. He got a job as a janitor at the school and was paid in part with private music lessons from the instructors there.

He self-published his first song in 1880, when he was only 18, a sentimental ditty called "We Sat Beneath The Maple On The Hill."

I was just eighteen years old, and not caring to enter in the rear, I set to work to study music, and before long I managed to get together a pretty air and had it arranged. It was the ‘Maple on the Hill,’ and became quite popular throughout the West. Music publishers are not over generous in taking to publishing or even handling music from an unknown person, and I found a great deal of trouble, but I gave one publisher money to get it out, and he took pity on me. The song proved a great go.”

Let's hear a 1926 recording of that song by Vernon Dalhart, a pioneering country singer (He's the first to record "The Wreck of the Old 97" back in the 1920s.) But hey Vern, you don't sound that country here!

Davis kept writing and publishing songs. Before long, he hooked up with Cincinnati publisher George Propheter, who in 1886 moved to New York. Davis followed him. Davis kept writing as well as performing. In 1895 he was invited by the New York World to enter the paper's contest to determine the 10 best songwriters in the U.S. Davis came in second with his song, "Send Back the Picture and the Ring", and won a prize of $500 in gold.

I couldn't find a recording of this online, but here's a melodramatic1893 song -- composed by Davis and lyricist William H. Windom -- called "The Fatal Wedding." This was Davis' first national hit The performer here is another white country singer, Bradley Kincaid.

Vernon Dalhart also recorded another Davis tune, "The Baggage Coach Ahead." This is a more recent live version by the late Mac Wiseman.

This is "My Creole Sue," which Davis published in 1898, a year before his death. This recording is from 1923 by a group called The Shannon Quartet.

None of the above songs are very familiar to modern audiences, but chances are you've heard this one. A 2000 report by NPR says Leadbelly always attributed "Goodnight Irene" to his uncle. However, Davis composed the song he titled "Irene, Good Night" in 1886. It became a favorite of traveling minstrel shows. 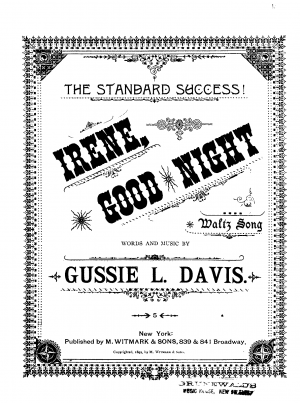