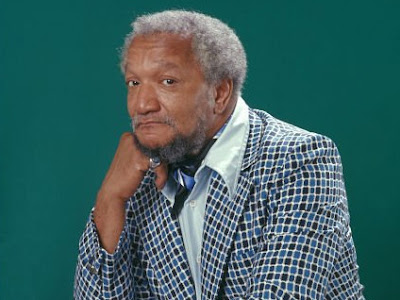 On Dec. 9, 1922, John Elroy Sanford was born in St. Louis, Missouri. He grew up to be known by another name, Redd Foxx. But he didn't forget the surname of his birth. Probably more people know him from the hit sitcom Sanford & Son than his previous decades as a raunchy "party records" comic. (His character's name, Fred Sanford, also happened to be the name of his father and his older brother.)
Although he's far better known as a comedian, Foxx also was a singer. When he was just a 13-year-old kid, according to his website, Fox "supported himself by playing the washboard in a band."
Soon he began his career as a stand-up comedian on the Chitlin Circuit. To put it mildly, he wasn't afraid to "play blue." By the mid 1950s his nightclub career led to a recording career, with Foxx creating an avalanche of "party albums" that sold admirably, despite the fact that none of his records ever had any chance of actual radio play.
But even before that, Foxx recorded five R&B singles for Savoy Records. Here's one from 1946, a tune titled "Fine Jelly Blues."
He also sang with bands like the Kenny Watts Hot Five. (Pianist Watt with Kenny Watts & His Brooklyn Buddies backed Foxx on his Savoy singles.)
This one's called "Shame on You" from 1947.
Foxx recorded some more R&B singles in the mid '50s. Here's  "It's Fun To Be Living In The Crazy House," from 1957.
As Fred Sanford, Foxx often sang on his TV show. This one, "All of Me"  is a duet with Scatman Crothers.
And in honor of the season ...
Happy birthday, Red! 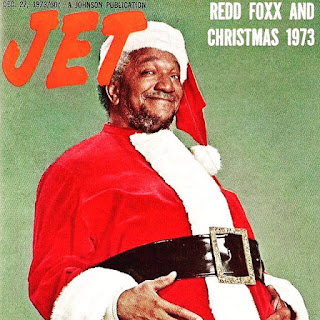