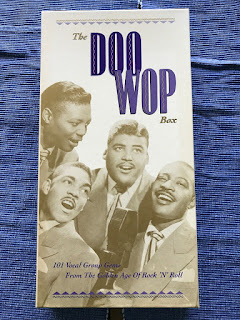 The Glory of Love by The Five Keys
Count Every Star by The Ravens
Native Girl by The Native Boys
Betty My Love by The Cadillacs
Later That Night by Ruben & The Jets
Memories of El Monte by The Calvanes
Earth Angel by The Penguins
Amazons and Coyotes by The Dreamlovers
Life is But a Dream by The Harptones
Over the Mountain, Across the Sea by Johnnie & Joe
Sorry (I Ran All the Way Home) by The Impalas
A Lover's Prayer by Dion & The Belmonts
Since I Don't Have You by The Skyliners
What's Your Name by Don & Juan
My True Story by The Jive Five
Gee by The Crows
We Belong Together by Robert & Johnny
Daddy's Home by Shep & The Limelighters
Goodnight My Love by Jesse Belvin
CLOSING THEME: Over the Rainbow by Jerry Lee Lewis