About a week ago I got in a discussion on Facebook with my friend Max about the magic of doo wop. I sent him a link to an old piece I wrote in 1994 about meeting Gaynel Hodge in Phoenix the night before that year's Lollapalooza (re-published on this blog a mere 17 years ago).

Afterwards I remembered that just a few months before encountering Gaynel, I'd written a Terrell's Tune-up column about a wonderful Rhino Records box set that collected four CDs worth worth of doo wop classics.

So what the heck? Here's that column, which hasn't been published since its original appearance in the Santa Fe New Mexican's Pasatiempo. I'll insert a few videos and links.

A version of this was published in The Santa Fe New Mexican
May 27, 1994

Like most folks my age, I first became cognizant of doo wop music in the late 1960s through such comedy groups as Sha Na Na and Frank Zappa's Ruben and The Jets.

In other words, for years, doo wop seemed like a quaint joke. Ram a lama ding dong. You, know, stuff like that.

But one night last winter I was driving alone on a rainy night, listening, for reasons I don't remember, to an oldies station, which happened to play “I Only Have Eyes for You” by The Flamingos.

There's a strumming of three guitar chords, followed by the steady beat of a piano. Singer Tommy Hunt comes in singing effortlessly,  My love must be a kind of blind love/I can't see anyone but you , as if he's got to justify what he has to say.

Then the group responds with unintelligible, almost discordant syllables, like some kind of eerie voodoo chant. All this before Hunt starts the first verse, invoking celestial bodies.

By the end of the song, all five Flamingos are gushing the beautiful melody, the falsetto going nuts as if possessed by the loa  of high register. It almost seems that the group is having the aural equivalent of a simultaneous orgasm, right there in the echo chamber.

But way before the song got to this point on that rainy Santa Fe night, I was transported into the past, reliving a buried memory of being a 5-year-old kid, listening to a radio late at night to a sound that was alluring and forbidding at the same time, just like Lou Reed's Jenny.

Or just like Paul Simon's “Rene and Georgette Magritte”:

The Penguins, The Moonglows, The Orioles, The Five Satins/The deep, forbidden music they'd be longing for ...

And, as if by magic, just a couple of weeks later Rhino Records announced its new four-disc Doo Wop Box.

In recent years, with all-oldies radio, recurring '50s revivals and all, much of the mystery and power has been sapped out of this strange and wonderful music.

Therefore, it is best to look at Rhino's Doo Wop Box with the eyes of Rene and Georgette, wide-eyed immigrants entering a new world, where almost every song is an adventure. Even overly familiar tunes,  “16 Candles,” “Only You,” “Earth Angel,” regain some of their magic if listened to in this spirit.

Listening to the four hours-plus of music in this collection, one realizes there are definite traits of the doo wop Universe.

Sometime it seems like a world in which every utterance, every movement is painstakingly planned, every harmony in place. But, then, before your very ears, it will seem to break down into near anarchy, a falsetto screaming like a banshee, the bass man grunting noises that seem to come from deep within the earth.

There's an underlying religious atmosphere. Although God is rarely mentioned after The Orioles' “Crying in the Chapel.”

But there's all sorts of holy imagery here, “Earth Angel,” “The Book of Love,” “The 10 Commandments of Love,” “Devil or Angel.”

There's also evidence of nature worship. For instance, Dion asks the stars up above why it hurts to be a teen-ager in love.

Doo wop singers tend to give themselves mythic powers. They always are willing to climb the highest mountain and swim the deepest sea.

And sometimes a group almost will prove itself to be superhuman with songs that are downright transcendental.

There's  “My True Story” by a Brooklyn group called The Jive Five. The sad little love story of Earl and Sue might seem lethally corny under any other context. But, when Eugene Pitts wails,  “And you will cry cryyyyyyy cryyyyyyyyy ...” any listener who ever has had his heart ripped out will know this is the real thing.

Then there's “Since I Don't Have You” by The Skyliners, a white group from Pittsburgh. Forget about Axl Rose's limp cover. He's outgunned by Jimmy Beaumont who by the end of the song shouts “You-ooh! You-oooh! You-oooooh!”  like a wounded accuser while Janet Vogel sings a near aria like a siren of the cosmos in the background. [Note from 2021: I'm not sure why The Skyliners, in this 1959 TV appearance are dressed up like they're serenading Marshal Dillon and Miss Kitty at the Longbranch Saloon!]

Despite some self-conscious goofery here and there, the most appealing thing about doo wop is its sincerity. When Johnny Maestro (now there's a rock 'n' roll moniker!) of The Crests sings, “You are the prettiest, loveliest girl I've ever seen,” to his 16-year-old birthday girl, you know he means every word. And because of the forceful way he sings it, a listener will believe Maestro will feel that way about his sweetie for the rest of his life. 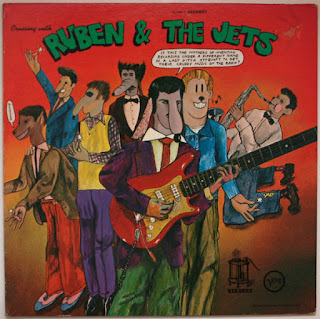