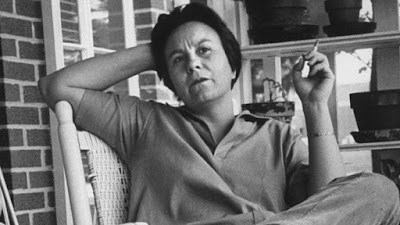 In Monroeville, Alabama on this day in 1926 Nelle Harper Lee was born. She grew up to become one of the best known and most respected novelists of the 20th Century, mainly due to some book about mockingbirds.

First here's a well-known tune by Inez & Charlie Foxx, a brother and sister team from North Carolina, who released this in 1963, three years after Lee published To Kill a Mockingbird.

Fans of The Three Stooges or Heckle & Jeckle should recognize this next one. "Listen to the Mockingbird, composed in 1855 with lyrics by Septimus Winner (under the pseudonym "Alice Hawthorne") and music by Richard Milburn, was a pop smash during the American Civil War.

Zooming ahead to the late 1980s, the duo House of Freaks did this song on their wonderful album Tantilla.

Country singer Pam Tillis twisted the title of Lee's famous book in 1995 for this sweet song of barroom violence:

Finally, here's a version of the Inez & Charlie hit performed in 1968  by Dusty Springfield and Jimi Hendrix (I'm not kidding!) on British TV.