“I first heard about the event in the 90’s when Nathalie Bonnard-Grenet, who’s from France, called me to ask me to play at this global music event that started in France and happened on Summer Solstice,” the longtime Santa Fe musician said recently. Bonnard-Grenet, she said, asked her to play in front of a local Starbucks. Several other local musicians were asked to play at other Santa Fe spots that day as well.

It wasn’t exactly a red-letter day in the singer’s career.

Performing in front of the coffee shop with local cellist Michael Kott, McCarroll recalled, “We had to pay for a buskers license which cost $35, we didn’t get paid and made about $5 in tips.”

That’s a gig that most musicians trying to make a living in Santa Fe can relate to. 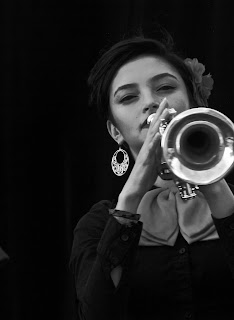 But that would not be the end of Make Music Day in this town. In 2012, Bruce Adams, former owner of The Santa Fean magazine, and Mary Bonney brought Make Music back to Santa. Adams and Bonney produced the event for two years. In 2014 they asked The Santa Fe Music Alliance to take over.

McCarroll, who later became president of the Music Alliance, took charge of the event that year, which was a big outdoor show at the Santa Fe Railyard. Nobody can question her dedication to the cause.

One year McCarroll even suffered sun stroke while trying to manage the stage during a particularly scorching Make Music Day. She still has vivid memories of sitting inside the nearby Violet Crown theater, with ice on her neck, directing the show via text messages to Music Alliance vice president Amado Abeyta, family members and other volunteers outside.

A big Railyard blowout, featuring several bands playing on the outdoor stage, was the format of Santa Fe’s Make Music Day for the next several years. Performers included a who’s who of local bands, all of whom were paid to perform.

And then came the COVID-19 pandemic in 2020, which caused last year’s local Make Music events to be cancelled.

But now Make Music Day is returning to Santa Fe on Monday, June 21 for a mostly virtual event – with a few live performances at venues including Santa Fe Brewing Company and The Candyman. All events are free and open to the public.

Besides the Santa Fe Music Alliance, organizations and businesses behind this year’s local celebration include the city of Santa Fe’s Arts and Culture Department, the New Mexico Music Commission Foundation, The Candyman Strings and Things, Amp Concerts, and Kludgit Sound. Sponsors include local radio stations KSWV, KBAC and KSFR and The Santa Fean.

It’s no coincidence that the woman who first contacted McCarroll about Make Music Day back in the ‘90s was French. The event has origins in France’s national government. In October 1981, French Minister of Culture Jack Lang appointed Maurice Fleuret, a composer and music journalist, as director of music and dance.

In response to a national study that showed that half of France’s young people played a musical instrument, Fleuret created a national festival, called “Fête de la Musique,” dedicated to give all sorts of musicians – all ages, all genres, all skill levels, professional and amateur – the opportunity to perform.

“We needed an event that would allow us to measure what place music occupied in individual and collective life,” Fleuret said in 1983. “A spectacular movement of awareness, a spontaneous impetus to alert public opinion and perhaps also … the political class. This is why the Ministry of Culture had the idea of organizing a Fête de la Musique in 1982. A non-directive celebration, which brings together all French people for whom music matters.”

It wasn’t one big show on one big stage. Rather there were hundreds of performances “everywhere in the streets, squares, kiosks, courtyards, gardens, stations, squares …” according to the French Ministry of Culture’s website.

And within a few years the idea spread to other countries, including the U.S.

On summer solstice two years ago, according to the Make Music Day website 85 North American cities organized 5,383 free concerts at 1,862 locations on this continent and more than 1000 cities worldwide.

Abeyta, a local musician and KSWV radio host, who has been involved for several years with Make Music Day — both as a performer and stage manager — said recently that it’s a relief to see live performance on Santa Fe’s horizon once again. 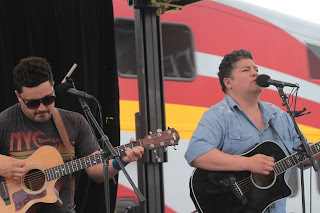 “The effect of the pandemic on musicians and the whole artistic community has been awful,” Abeyta said. “You see prominent local musicians out busking or working construction, doing things they shouldn’t have to do just to survive. I’m really thankful to be able to do something musical again.” (Abeyta, in sunglasses playing in his band Sol Fire  with his brother Buddy Abeyta at a previous Make Music Day in photo at left.)

Among the early acts to sign up for this year’s show, according to Cindy Cook — a member of the local Make Music Santa Fe planning committee and co-owner of The Candyman Strings & Things — are Marc & Paula’s Roadside Distraction, Half Pint & The Growlers, singer-songwriter Lucy Barna, singer-composer Lisa B. Friedland, longtime local troubadour Michael J. Roth and rocker David Wheeler.

On the classical music side, Cook said The Santa Fe Youth Symphony as well as the Santa Fe Chamber Music Festival will be doing video performances. 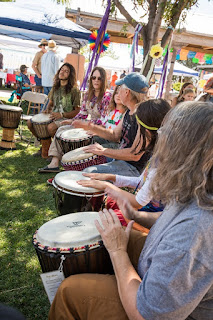 One of the day’s local live events, Cook said, will be a socially-distanced drum circle taking place on the covered porch of The Candyman, 851 St. Michael’s Drive, between noon and 5 p.m. “We’ll be giving away a free set of drum sticks, courtesy of Pro-Mark, to participants while supplies last,” she said. The store also will provide instruments for those who want to join the circle but don’t have their own drums or percussion instruments.

The Hohner company provided 100 free harmonicas for community members who would like to participate in Make Music Santa Fe. Cook said anyone who wants one of those harmonicas is encouraged to stop by The Candyman prior to June 21st. And for those wanting to learn how to actually play their new instruments, the store will provide free harmonica lessons from one of the city’s best-known harp-blowers, longtime Santa Fe musician and radio host “Harmonica Mike” Handler. Those lessons may be viewed online or taken in-person on Make Music Day.

Free ukulele books, courtesy of Alfred Publishing, are also available for pick up at The Candyman before June 21st. The store will provide free in-person or online video ukulele lessons. “For those that choose in-person lessons, if they don’t have a ukulele, they may borrow one of theirs,” Cook said.

Meanwhile, during his KSWV show on June 21 (11 a.m. – noon), Abeyta will play tunes from local musicians. Musicians who want to be included in this should drop their CDs at the Candyman before Friday, June 18, when the CDs will be delivered to the radio station.

McCarroll said she recently heard someone describe Make Music Day as a “musical holiday.” Indeed, that phrase captures the spirit of the event both locally and internationally. It always falls on solstice, June 21, which means that, like this year, most of the time it falls on a weekday. But even for those who have to work should think about taking a little music break, or two that day and catch some music either in person or online.

Musicians wanting to take part in Santa Fe’s Make Music Day can sign up at www.makemusicday.org/santafe. Registration closes on June 20.

Businesses, buildings, schools, churches, and other institutions can visit the website to feature their outdoor spaces as concert and musical activity locations.

Santa Fe musicians with pre‐recorded videos can sign up at www.makemusicday.org/santafe and provide links where their videos may be viewed. Videos may also be posted using the hashtag “#makemusicsantafe.” 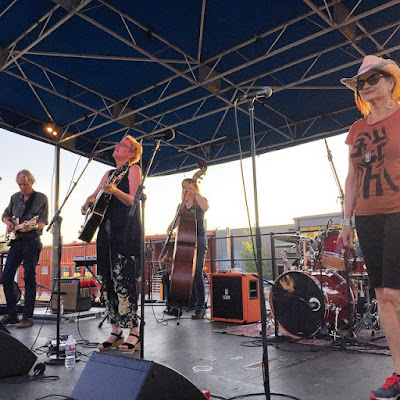