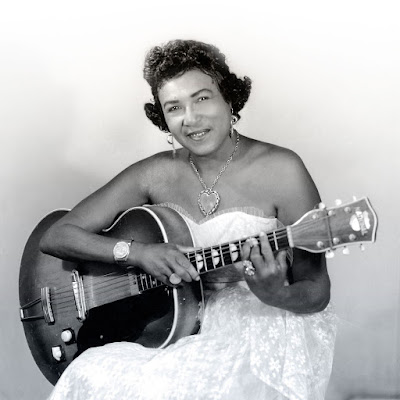 On this day in 1897 a girl named Lizzie Douglas was born. She went on to become one of the most influential blues singers of the early 20th Century under the name "Memphis Minnie."
And not only did she sing, she played a mean guitar as well.
From the Memphis Music Hall of Fame:
She sang about being “born in Louisiana, raised in Algiers” (a town just across from New Orleans), but that was poetic license. She was actually born in Mississippi, raised in Walls, a small farming community in DeSoto County south of Memphis, according to US Census data uncovered by Dr. Bill Ellis. She learned music early on, getting a guitar for Christmas at the age of 8. She was a wild child, running away from home for the last time at 13, heading for the bright lights of Beale Street, where, as “Kid” Douglas, she quickly made a name for herself with the jug bands and string groups that played on the street and at Memphis’ Church Park. Life was hard for a homeless kid and she grew up fast, earning a reputation for toughness, both personally and musically.

In the early 1920s, the most popular blues performers were Bessie Smith and the other classic blues singers - bejeweled women standing in front of jazz bands singing Tin Pan Alley blues. By contrast, Minnie’s style was far more raw and personal, and it endured long after that first blues craze. 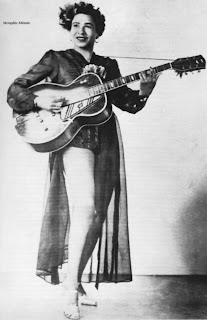 She moved to Chicago in the 30s, and there bested Big Bill Broonzy in a guitar "cutting contest." It was Broonzy's 40th birthday, June 26, 1933. According to this post on the American Blues Scene site:
The prize for the contest was a bottle of gin… and a bottle of whiskey.   The club was packed, standing room only, anticipating the contest.  The booze was flowing freely and everyone was excited.  The crowd buzzed.  Judges picked for the contest were Sleepy John Estes, Richard Jones, and of course, the man in the middle of Chicago blues during that time, Tampa Red.  ...
Tampa Red called Broonzy to the stage.  As soon as he walked up there, it is rumored the crowd cheered for 10 minutes before he even started a song.  He played two songs: “Just a Dream”, one of his personal best, and followed it with “Make my Getaway.”  The crowd roared.  He had done all he could.  Memphis Minnie was up next.  Tampa Red called her to the stage.  Instead of cheers, she was greeted by an eager crowd, who whispered and hushed each other into silence.  She also played two numbers: “Me and My Chauffeur Blues” and “Looking the World Over.”  However, as she finished her first song, the crowd cheered for over 20 minutes. ...
Memphis Minnie had won, just as Broonzy feared.  Estes and Jones approached Minnie, and lifted her onto their shoulders, carrying her around the club.  Big Bill got the last laugh, though.  While the crowd – and Minnie – were busy celebrating the victory, he snatched the bottle of whiskey and drank the whole thing.
Minnie, who had been in poor health for years, died in Memphis following a stroke in  in 1973. She was buried in her home town of Walls, Miss.
One of Minnie's first recordings in 1930 was "Meningitis Blues," a track on which she was accompanied by The Memphis Jug Band.
Perhaps Minnie's best-known songs was "Me and My Chauffeur Blues."

On this song, "When the Levee Breaks" actually features Minnie's husband Kansas City Joe on vocals. But she wrote the song and plays guitar on it. Led Zeppelin would later seriously mutate this tune.

And here's a little Hoodoo: