Yes, I know that the Beat Movement of the 1950s and early '60s produced lots of important art, literature, poetry and music, from Ginsberg to Kerouac to Charlie Parker. True American giants, all.

But I'm also enamored by the weird pseudo "culture" of phony beatniks, the dumb-ass beat stereotypes personified by Maynard G. Krebs, portrayed by Bob Denver on The Many Loves of Dobie Gillis. While Maynard became the face of the Beats to mainstream America (i.e. The Squares), there also was a spate of "beatnik" novelty songs that parodied the slang, the bongos, the espresso and the non-conformity of the beatniks.

You might have never heard this 1959 single, but punk-rock pioneer Richard Hell did and used it to create a punk-rock classic. "The Beat Generation" is by Bob McFadden and Dor. "Dor," (which is "Rod" spelled backwards) actually was poet Rod McKuen in his pre-Listen to the Warm days.

Here's a lady named Barbara Evans who has a "Beatnik Daddy":

Sex bomb Mamie Van Doren did this put-down song in 1959. She also starred in a 1959 movie of the same name, which also had appearances by Louis Armstrong and Vampira!).

Even Perry Como, who was as far from hip as humanly possible, got in on the phony beatnik action:

In 1960, a band called The Untouchables told the musical tale of Benny the Beatnik:

Another legendary pseudo beatnik was Bill, as immortalized in 1962 by Richard Pine

It's a little early for Christmas, but I'd slide down the chimney for Patsy Raye:

Edd Byrnes' character "Kookie" from the tv series 77 Sunset Strip wasn't really a beatnik. But after 1959's "Kooky's Mad Pad," I bet Bob Denver and the Dobie Gillis braintrust wishes they would have cashed in with some Mayard G. Krebs records: 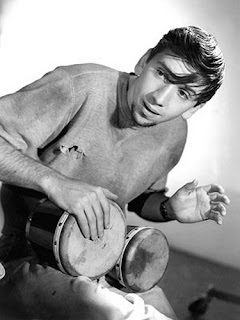