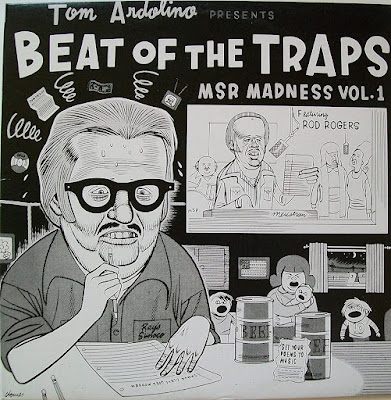 It's been nearly six years since I blogged about the twisted world of song-poems on a Wacky Wednesday.

Today I'm going to feature some examples of actual musicians, some of whom you might have even heard of, who have covered some classic song poems.

Their love is obvious.

But first, I know many of you who somehow missed my post in 2015 might be scratching your head, or other parts of your body wondering "What in tarnation is a `song-poem' ?"

Quoting again from the brilliant, if crazed, now out of print compilation called I'm Just the Other Woman, which I reviewed in The New Mexican back in 2001.

You've seen those ads in the back of supermarket tabloids, detective mags, movie rags and girlie books: “Song Poems Wanted. Your poems turned into songs by professional musicians. Send immediately for FREE evaluation ...

Of course, its a scam. It's been going on for years — a century by some reports.

You send in your poem and the company sends you back a glowing evaluation. Your song has true hit potential. Now all you need to do is send in $100 (or whatever the going rate is these days) and your poem will be put to music and recorded in an actual recording studio by some of the nations top session musicians.

... Theres always the implication that this recording will be sent around to the top A&R people at major record companies. And of course you'll get a few copies of the record to show your friends; in fact some song-poem companies actually have put out compilations.

The liner notes also point out that "this sleazy little corner of the music industry has attracted a subculture of fans who collect and groove on the strangest and most unintentionally funny song-poems they can unearth."

Here I'll spotlight the work on some members of that subculture who have performed song-poems. And each of those tunes will be followed by the original.

Let's start with the Jon Spencer Blues Explosion's version of "Beat of the Traps," which appeared on their outtakes compilation Mo' Width.

Somehow Spencer's version sprang from this tune sung -- or shouted -- by the Pavarotti of the Song-Poem, Rodd Keith. The Allmusic review of Spencer's album said the Blues Explosion's take is "never as weird as the original, hard as it tries. "

Iconic iconoclast R. Stevie Moore included John Trubee's  "A Blind Man's Penis" (originally titled "Peace and Love") as part of a medley with a couple of other classic American songs.

Trubee, who for decades has created wild music, usually under the name "John Trubee & The Ugly Janitors of America" wrote the lyrics in the '70s as a young man (was a teenager at the time) and paid some fee for a song-poem company to write the melody and record it. The country-fried singer is Ramsey Kearney, a monster of song poem vocals. Here's the original that made us all fall in love:

Texas singer Gretchen Phillips made a few changes to one of the greatest song poems in human history. Note, despite the title listed for this video, the correct title is "Gretchen Phillips Says Yes."

And here's the original disco version, about an actual president, sung by the amazing Gene Marshall:

For more info on song poems, check out the American Song-Poem Music Archives (which is still up ut hasn't been updated in years.

Here is my 2015 song-poem blog post. Among the videos are the original "Little Rug Bug" by Rodd Keith and the heart-wrenching cover by NRBQ.

Also this documentary by Jamie Meltzer called Off the Charts is a must-see. I've got the DVD. You can watch it HERE.