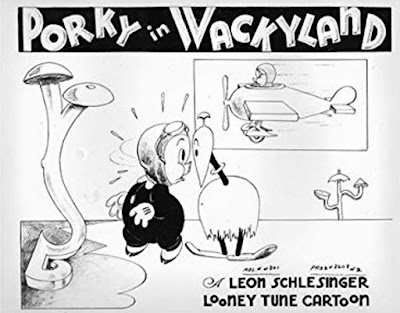 On this day 130 years ago, a child of German immigrants was born in Lexington, Missouri. Carl Stalling would grow up to become undoubtedly the greatest creator of cartoon music in the history of film.
Stalling,  Allmusic says, was:
...  the visionary behind the kaleidoscopic music beating at the heart of the classic cartoons produced under the aegis of Warner Bros. Studios during the middle of the 20th century. Frenzied and impassioned, his work broke new ground by following the visual trajectory of the on-screen action instead of the accepted rules of composition; the result -- a technique not anchored in conventional senses of time, rhythm, or thematic development -- was unprecedented in its extremism, as melody, style, and form crashed together in a glorious pile-up of sound and image. A maverick whose reach extended from pop to jazz to classical and beyond, Stalling's revolutionary cut-and-paste compositions remain a clear forerunner of the experimental music created in his wake -- in fact, it could easily be argued that he succeeded in introducing entire generations of young cartoon fanatics to the music of the avant-garde.
... Working with Warner's 50-piece orchestra under the direction of conductor Milt Franklyn, Stalling scored each cartoon in about three hours at a staggering rate of at least one a week, absorbing the influences of current pop hits, classical symphonies, and the like, and then quoting whatever seemed to fit ...


And, according to The Stephen W. Terrell (Music Web Log) "It's hard to imagine the music of Spike Jones or Frank Zappa without Carl Stalling." (Steve Terrell 2021)

Stalling learned to play piano at the age of six. By the time he was 12, he started a career as a pianist at silent movie theaters. (Silent movies depended on live musicians for their "soundtracks." I remember my grandmother telling me that as a girl in Oklahoma City she had a big crush on a clarinet player who worked in the band at her local silent movie joint. She called him "Clarinetti," but that's a whole other topic.)

But before silent movies had the opportunity to die, Stalling's career took an upward turn when, working at the Isis Movie Theater in Kansas City, he met a young filmmaker named Walt Disney who admired his work.

In 1969 interviews, (compiled and published in 1971, a year before Stalling's death) the composer told Michael Barrier, Milton Gray, and Bill Spicer that he met Disney in the early 1920s:

He used to come to the Isis Theater, where I played the organ and had my own orchestra. This was music to accompany silent movies, and I played the whole afternoon and evening. When I wasn't at the organ, I'd be conducting, or playing the piano and conducting. I had a pianist for a number of years, and then I just conducted. Walt was making short commercials at that time, and he'd have us run them for him. We got acquainted, and I had him make several song films. The End of a Perfect Day, showing a sunset…Victor Herbert's A Kiss in the Dark. The words would come on one at a time, with the music. This was before sound, of course.

Like Disney before him, Stalling, in the late 1920s, left Kansas City for Hollywood. He scored a couple of Mickey Mouse shorts for Disney. But probably his most memorable work there was his music for Disney's Silly Symphonies series. The first of these (1929) was called The Skeleton Dance. From that same interview:

The Skeleton Dance goes way back to my kid days. When I was eight or ten years old, I saw an ad in The American Boy magazine of a dancing skeleton, and I got my dad to give me a quarter so I could send for it. It turned out to be a pasteboard cut-out of a loose-jointed skeleton, slung over a six-foot cord under the arm pits. It would "dance" when kids pulled and jerked at each end of the string.

Listen to Stalling's music and shake your bones!

Stalling left full-time employment Disney Studios in 1931 to freelance for Disney and other studios. In 1936 he was hired by Warner Brothers, where he'd work for the next 20-plus years. Here's a medley of some of his early work there:

Here's one especially appropriate for Wacky Wednesday, "Porky in Wackyland" (from 1938, along with "Dough for the Do Do" from 1949.)

If you play this one backwards you'll hear a sinister voice saying "Elmer Fudd sucks cocks in Hell!"