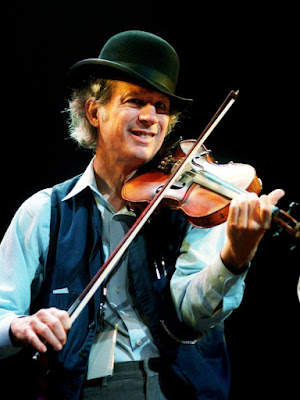 Eighty four years ago today, December 30, 1937, in New York City (New York City????!!?) a boy named John Hartford was born. His family soon moved to St. Louis, where young John grew up watching the boats along the Mississippi (he'd later work as a towboat pilot on the Upper Mississippi and Illinois rivers) and listening to the Grand Ol' Opry on the radio.

He'd grow up to become one of the finest hillbilly instrumentalists (guitar, fiddle, mandolin), singers and songwriters of the late 20th Century.

Most of us first became familiar with Hartford after a little song of his, having something to do with rolling up his sleeping bag, became Glen Campbell's first solo hit. Soon after that Hartford became a regular on the Smothers Brothers Comedy Hour as well as the short-lived Glen Campbell Goodtime Hour.

Here are Hartford and Campbell performing that song on tv:

But Hartford quickly proved that he was no one-hit wonder. Though no other song of his ever became nearly as famous as "Gentle on My Mind," and his albums weren't exactly commercial smashes, in the 1970s he made some of finest country and bluegrass music around. His 1971 album Aereo-Plain, recorded with Norman Blake, Vassar Clements, Tut Taylor and Randy Scruggs should be considered a classic.

This is a later career (1999) song about New Mexico's most celebrated troubled youth:

Hartford died of cancer in 2001. His last hurrah was his appearance in the still amazing soundtrack of O Brother Where Art Thou? and the subsequent concert film, Down From the Mountain for which he served as MC as well as a performer:

Finally, here is my favorite Hartford song of all time, In Tall Buildings.