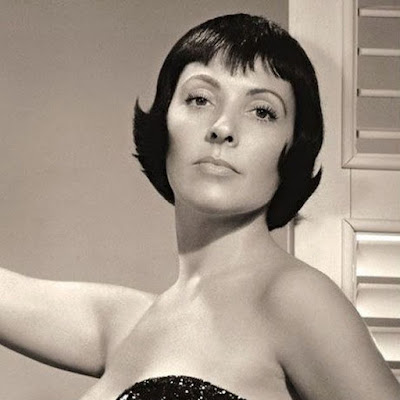 On this day four years ago, December 16, 2017, we lost a wonderful American voice, Dorothy Jacqueline Keely, better known as Keely Smith. She was 89.
Keely, born in Norfolk, Virginia, became famous for singing in her husband Louis Prima's band. She met and began recording with Prima in 1949. They married in 1953 (and divorced in 1960.)

Onstage, besides her singing ability, Keely was best known for her hilarious deadpan expression and often appearing irritated at her husband's highly animated antics. Her obit in the New York Times says, "Her coolness amid Mr. Prima’s chaos cemented them as one of Las Vegas’s premier attractions and foreshadowed the style of Sonny & Cher in the 1960s."
I never thought of Louie and Keely in terms of Sonny & Cher, but, whatever ... Check out this 1960 clip from The Ed Sullivan Show.

I'm not sure where this performance was, but Prima & Smith's version of "That Old Black Magic" is one of their best-loved tunes.

In the mid '60s she released Keely Smith Sings the John Lennon—Paul McCartney Songbook, a collection of Beatles tunes. Here's a swingin' version of "Please Please Me."

But this was her first solo hit, from 1957. Keely, wherever you are, we wish you love.