A version of this was published in The Santa Fe New Mexican
May 30, 2008

“You Just Can’t Play a Sad Song on a Banjo,” is the name of a song Willie Nelson covered a few years ago:

“Now bad news just won’t hang around the banjo/Old dismal gloom will have to disappear/A sad song can’t be played so please don’t be afraid/Cause you just can’t play a sad song on the banjo.”

Steve Martin, a banjo picker as well as a comedian, has made similar statements. Back in the ’70s (when he was funny), Martin had a routine that got a lot of laughs when he suggested Richard Nixon would have had a much better time had he only played the banjo.

Of course it’s not true that there’s no sad songs on the banjo. Classic bluegrass tunes like “Little Girl and the Dreadful Snake,” “Beautiful Blue Eyes” and various tales of murder, mining disasters, and crib death can hardly be classified as cheerful little ditties. And in recent years, Tom Waits and acolytes such as The Dead Brothers from Switzerland have used banjos to create spooky, atmospheric sounds. 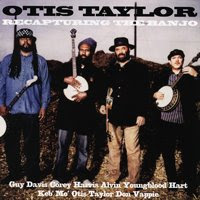 And now Otis Taylor and a small army of his contemporary blues honchos completely blow that “happy banjo” theory to smithereens on Taylor’s latest album Recapturing the Banjo. There are sad songs, intense songs, and even a few that hint at “old dismal gloom” on this album.

Like on all Otis Taylor albums, the songs’ lyrics speak of slavery, poverty, death, and tragic love, and there are even some tales of black cowboys. To be sure, there are some cool upbeat tracks, too, like Gus Cannon’s jug-band stomper “Walk Right In” and the Haitian kiddie song “Les Oignons.”

So why does the banjo have to be “recaptured”? In modern times when someone thinks of a banjo, it’s in terms of bluegrass or other “hillbilly” music. Or cornball Shakey’s Pizza nostalgia Americana — white-bread Americana. Or even worse, it conjures up racist imagery of black-face minstrels plunking the banjo and singing about eatin’ possum with the old folks back home. In recent decades, black musicians have shunned the banjo to an overwhelming extent. In an interview earlier this year in No Depression, jazz-banjo master Don Vappie, who plays four-string tenor banjo on Taylor’s album, said, “The banjo has many stereotypes to overcome. A lot of black people hate the banjo, because it has come to stand for a very oppressive time.”

The banjo, or at least an early version of it, was brought to America by slaves. It originated as an instrument used by griots, the traditional bards of West Africa. As Vappie explained, “Here’s an instrument that was part of a culture — part of a people — who were taken from where they are and brought somewhere else. And over time, those people had learned to hate something that was part of them, part of their past.”

Vappie has made a career of the banjo — which had an important place in the music of early New Orleans jazz bands. Taylor — who didn’t begin his career as a solo bluesman until the mid-1990s, when he was in his 40s — also has been a proponent of the instrument going back to his late ’90s album Blue-Eyed Monster.

In some ways Recapturing the Banjo is almost like a mini Otis Taylor retrospective. It features new versions of old Taylor songs such as “Bow-Legged Charlie” and “Five-hundred Roses” (both from his album When Negroes Walked the Earth); the garage-band standard/Jimi Hendrix classic “Hey Joe,” which was on Blue-Eyed Monster; and “Ten Million Slaves.” (I have to admit, I prefer the original version of “Ten Million Slaves,” which was on his 2001 album Respect the Dead. The original had a banjo, but it also had a cool fuzzy guitar by Otis’ former lead ax-man Eddie Turner.)

And in some ways, Banjo is almost like a modern blues summit, featuring collaborations with the likes of Alvin Youngblood Hart, Corey Harris, Guy Davis, and Keb’ Mo’. All play banjo and contribute vocals. Taylor magnanimously lets his guests take center stage on some tunes. And the whole affair comes off more like an organic jam among friends than a tacky marketing ploy, which is a huge problem with many guest-heavy albums.

And even though just a few weeks ago I wrote in these pages that I wasn’t the biggest fan of Keb’ Mo’, his song “The Way It Goes,” which ends this album, is a true delight. It’s just Keb’ — his banjo, his voice — singing about the need to slow down in life.

Still, the real champ on this record is a new original Taylor song; “Absinthe” makes my heart grow fonder. Not only are there dueling banjos but also a dreamlike coronet by Ron Miles and ghostly background vocals by Taylor’s daughter Cassie all over second-line drumming.

While Taylor and friends want to “recapture” the banjo, this album never comes off as some historic-preservation project. It’s just good American music. *Boogie the House Down Juke Joint Style by The Juke Joint Pimps. This is good stinky blues from Cologne, Germany. This duo, singer/guitarist T-Man and drummer/harmonica-man Mighty Mike play it nice and primitive like a Teutonic version of T-Model Ford and his drummer, Spam.

The song selection isn’t terribly original — Elmore James’ signature “Dust My Broom” and Muddy Waters chestnuts like “Rollin’ and Tumblin’” and “I Can’t Be Satisfied” among the tracks here).

But I’ll give them points for their take-off on Slim Harpo’s “Hip Shake,” the delightful "Dick Shake."

This isn’t authentic, and purists undoubtedly will turn up their snoots. But these Krauts have spirit.
at May 30, 2008