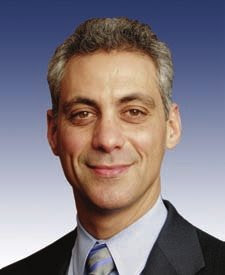 I had a brief interview with U.S. Rep. Rahm Emanuel this afternoon. He was at Gabriel's restaurant north of Santa Fe at a fund-raiser for 3rd Congressional District candidate Ben Ray Lujan.

Earlier in the day I was reading Emanuel's Wikipedia entry and came upon this sentence:

"He was in a one-man Klezmer band called Rahmbunctious Eman."

How could I not ask him about it?

According to the footnote in Wikipedia, the klezmer claim supposedly was in a 2005 Rolling Stone profile. However, looking over the article, there's nothing about Rahmbunctious Eman in it.

After embarassing myself, Emanuel said, "When you asked me about music, I thought you were going to ask me about Wilco. I have a Wilco radio ad. Or Ryan Adams ... you ever heard of him?"
at August 07, 2008