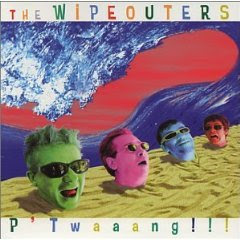 *P'Twaaang!!! by The Wipeouters. Like thieves in the night, early in this century Devo returned and, under an assumed band name, recorded an album of mostly instrumental tunes that only can be described as New Wave surf music.

If Dick Dale was a kooky robot ... If there were surfers on Neptune ... pure techno-goof summertime fun.

And if you did surf sitar, check out the songs "Wounded Surfer," "Wedgie Wipout" and the "Rocket Power Theme."

(Thanks to the Music for Maniacs blog for turning me on to this. And check out the interview with Mark Mothersbaugh about The Wipeouters HERE.) * Barn Dance Favorites by The Pine Valley Cosmonauts. This is a fun little EP from Bloodshot Records I somehow missed a few years ago. Basically it's old country tunes from the old National Barn Dance radio show, which broadcast out of Chicago between 1924 and 1960. Singers here include Jon Langford, Sally Timms, Kelly Hogan, Tracy Dear and Scott Ligon, with fiddling by Johnny Frigo.

Several of the eight songs are familiar -- "I Want to Be a Cowboy's Sweetheart," "Blues Stay Away from Me," "Bye, Bye Blues" (Frigo's big spotlight number) and Grandpa Jones' "Here, Rattler, Here," (which Langford performs in an easy-going style rather than Grandpa's maniac bluegrass style.)

My favorite that I hadn't heard before is "Little Red Barn," sung by Dear, which is about an Indiana farmer. Like the best Bloodshot projects, the performance is done lovingly, though not over reverently. 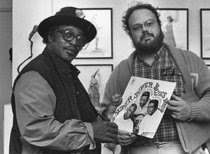 *Live 1984 by Bo Diddley. I guess there was some kind of blues revival going on in the mid '80s. (Isn't there always some kind of blues revival going on somewhere?) There sure were a lot of major blues R&B and early rock 'n' roll acts coming through Santa Fe back then -- Buddy Guy & Junior Wells, Albert Collins, James Cotton, Robert Cray, The Legendary Blues Band featuring Pinetop Perkins, Gatemouth Brown, Screamin' Jay Hawkins, Charlie Musselwhite, and of course Bo Diddley. This album was recorded less than a year before Bo played Club West -- after being made an honorary Santa Fean by the late Mayor Louie Montano earlier that day.

I'm not sure where this album was recorded. Released by a label called Goldenlane, it's apparently available only as downloads and not much information is given. Also it appears to be a shorter version of a record released a couple of years ago as Bo's the Man, which included three "bonus" studio tracks.

Bo of course was way past his hit-making prime by this point, but he could still romp through his greatest hits ("Mona," "You Can't Judge a Book," "I'm a Man," "Roadrunner" -- but no "Who Do You Love" -- in sets peppered with a few obscurities. ("Dr. Jekyll," "Everleen"). The band, a British group called Mainsqueeze, is punchy and competent, if not totally inspiring.

So if you're a Bo fan and want a decent live show from this period, this album isn't bad. But new fans definitely should start with his original stuff.

Warning: This album is available under three different titles on eMusic. Others include Mona and Bo Diddley with Mainsqueeze.) * At Last by Screamin' Jay Hawkins. This is Screamin' Jay's last studio album, released a couple of years before his February 2000 death.

Like most of his 1990s albums -- Black Music for White People, Stone Crazy, etc. -- it's good solid blues rock with lots of voodoo and madness, Hawkins' strong baritone making him sound like an opera singer caught in carnival spookhouse.

Among the highlights is "Coulda, Shoulda, Woulda," a slow blues featuring a tasty fiddle and an female vocalist named Kelley Hurt. "Potluck" is a re-write of "Feast of the Mau Mau" and "Alligator Wine." And, while this one doesn't have any Tom Waits songs (Screamin' Jay was one of Waits' finest interpreters), there's a crazy cover of "I Shot the Sheriff," one of the few blues songs of any era that namechecks Boris Yeltsin. 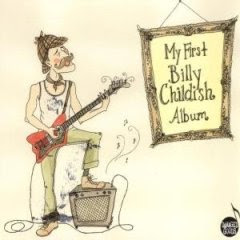 * My First Billy Childish Album. This isn't really my first Billy Childish album. That would be Surely They Were Sons of God by Thee Mighty Ceasars, one of several Childish bands represented on this outstanding compilation. There's them Ceasars, Thee Headcoats, their gal pals Thee Headcoatees, The Buff Medways, The Pop Rivets, The Chatham Singers, The Delmonas, The Buffets ... begging the question, "Where's The Milkshakes, The Natural , The Musicians of the British Empire, etc.?

But who's complaining? This is a fine overview of the handlebarred hero and his invaluable contributions to garage rock.

The highlights here include "I Feel Like Giving In," sung in French by the Childish-led girl group The Delmonas, a raw Bo Diddley-beat cover of Dylan's "Ballad of Hollis Brown" by Thee Headcoats, and The "Buffets' simple, direct "You Piss Me Off."

Also, "Davey Crocket" -- a screwball "history" tune inspired by "Farmer John" and The Ramones "Gabba Gabba Hey Hey" chant -- inspired me to download the rest of the original album it came from ... 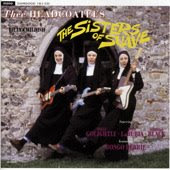 *The Sisters of Suave by Thee Headcoatees. The Delmonas isn't the only girl group Childish created.

There are not one, but two songs about martial arts here -- "My Boyfriend's Learning Karate" (Someone, quick, get this song to Petty Booka!) and "Jackie Chan Does Kung Fu." There's a cover of a Sonics song, the classic "Strychnine." And there's even a Christmas song in which the girls do to Santa Claus what they did to Davey Crocket. 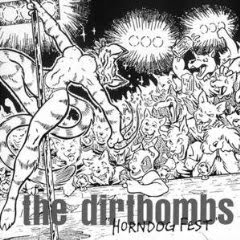 * Horndog Fest by The Dirtbombs. We Have You Surrounded is one of my favorite albums so far this year, so I figured I'd check out The Dirtbombs' first album, released in 1997.

This is rougher and rawer than Surrounded, but the Dirtbomb spark is there. "Bittersweet Romance Song" is based in '60s soul as well as guitar crunch. And the ultra-bitchen stomp "Can't Stop Thinking About It" sounds a lot like "Wreck My Flow," one of my favorite songs from Surrounded.

Plus ... the songs I didn't already have from The Pretty Things' self titled album.

Plus ... I accidently downloaded The Dirty Projector's "The Kindness of Uncles" from their album New Attitude. I just meant to listen to it, but I was tired and accidently pressed "download" instead of "play." I don't like it very much. This mistake means I'll have to download The Dirtbombs' "A Brief Treatis on the Discovery of Anti-matter" from Horndog Fest when my downloads refresh next week.
at August 14, 2008