ROUNDHOUSE ROUND-UP: CALL HER, BUT NOT THAT NUMBER

A version of this was published in The Santa Fe New Mexican
August 7, 2008

Rio Arriba County residents who recently received a mailer attacking state Rep. Debbie Rodella, D-Española, got a surprise if they followed the instruction to call Rodella and “remind her she works for you, not her big money contributors.” 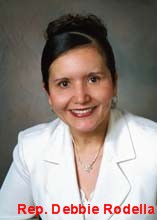 Keegan King, director of New Mexico Youth Organized — the Albuquerque-based group responsible for both mailings — said Wednesday that the Rodella mailing used the same template as the Robinson mailing.

For example, based on campaign finance reports going back to 2004, 29 percent of Rodella’s campaign funds have come from health care, insurance and pharmaceutical companies, 15 percent from the banking and payday loan firms, and 13 percent from liquor and tobacco interests.

Robinson’s mailing came up in the recent lawsuit filed by Robinson, Sen. James Taylor and Rep. Dan Silva (also Albuquerque Democrats) asking a judge to overturn the results of the June primary. The three defeated lawmakers claim their opponents acted with nonprofit groups and others to evade state campaign finance laws. NMYO’s Legislative Accountability Project is named in the lawsuit.

The group is associated with the Center for Civic Policy, which the lawsuit claims received $1.5 million from billionaire George Soros, a charge the center has denied.

King said the project wasn’t aimed at the primary election. Rainaldi isn’t seeking re-election, while Rodella had no primary opponent and has no general-election challenger.

Why these five legislators? “They’ve taken a lot of money from special interests,” King said. “They’ve voted against ethics reform. People should know their record and who their contributors are.”

“This is about the special session.” King said. Indeed, the mailing with the wrong phone number says, “When the Legislature addresses the health care crisis facing our families, will Debbie Rodella represent you or her big money backers?”

After the phone number screw-up was brought to the attention of NMYO, the group created another mailer with the correct number for Rodella.

Again referring to the special session, the mailer says, “Will health care reform pass? Special interests will try to stand in the way. They’ve already been handing out big campaign contributions.” Then in big letters: “The Legislature is not an auction.”

Citizen of the month: Being mayor of Santa Fe involves handing out a lot of proclamations. But on Wednesday he issued a proclamation full of barbs.

In a ceremony on the Plaza, Mayor David Coss named Ed Tinsley the “Santa Fe Resident of the Month” award.

Tinsley — the Republican candidate for Southern New Mexico’s 2nd Congressional District — has a house in Las Campanas and operates his business out of Santa Fe. Tinsley also has a ranch in Lincoln County, which is in the southern congressional district.

Some opponents in June’s Republican primary blasted Tinsley for his Santa Fe ties. Lately, his Democratic opponent, Harry Teague, also has picked up on the line of attack.

But the man being “honored” here on Wednesday wasn’t invited to the event. Coss said he didn’t think Tinsley would attend.

According to a 2006 news release from the National Restaurant Association — an organization Tinsley once chaired, “Tinsley is the president and (chief executive officer) of Tinsley Hospitality Group, LLC, a Santa Fe, N.M.-based restaurant intellectual property company and master franchisor of K-BOB’s Steakhouses, which franchises operations of 22 stores located in New Mexico, Texas, Oklahoma and Colorado.”

Coss pointed out Tinsley doesn’t have any restaurants in Santa Fe, saying the Republican doesn’t want to pay his employees the city’s minimum wage. Tinsley has criticized the “Living Wage” law. In 2003, he said the higher wage is the main reason he decided against opening a K-BOB here. In a 2003 article in the online Market Watch, Tinsley called the “Living Wage” a “virus that is crippling businesses and stagnating local economies across the country.” Coss admitted the award was a “political statement” and in fact is the first and only “Resident of the Month.”

“We usually do ‘Mucho Gracias’ awards,” Coss said. Wednesday’s certificate, which looked like it came out of a photocopy machine, was far less ornate than most certificates that come out of the mayor’s office. For instance, the “Honorary Santa Fean” award that Mayor Louis Montaño, who died last week, presented to the late rock pioneer Bo Diddley in 1985 was a lot fancier.

It’s also questionable whether Tinsley would qualify as “resident of the month” in Santa Fe because his part-time home is outside the city limits. “He’s a resident of the Santa Fe community,” the mayor said.
at August 07, 2008