It had been weeks since any serious talk has appeared in the national media about Gov. Bill Richardson’s chances of becoming Barack Obama’s running mate. Most of the squawk on Richardson over the summer seemed to be based on the assumption the governor is bucking for secretary of state.

Then, early this month, came that editorial in The Denver Post. 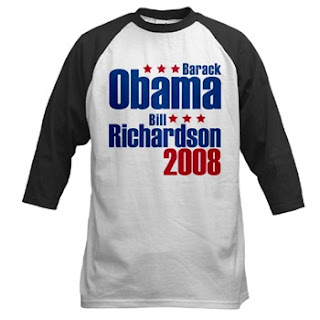 “His outstanding record makes him an ideal partner for Obama, not only on the campaign trail but at the vital job of shaping America’s future,” the paper said. “... Richardson’s record not only qualifies him to assume the presidency, it makes him an ideal partner to the visionary and eloquent Obama in the task of running this country. And as a leading figure in a Rocky Mountain West that has emerged as a swing political region, Richardson could do more than any other possible running mate to carry the Democratic ticket to victory in November.”

It’s not clear what effect that editorial might have on Richardson’s chances of getting on the ticket.

If he has been meeting with Obama’s veep vetters, they’ve done a great job of keeping that secret.

But could it be that people on the other end of the political spectrum are starting to take seriously the idea of Richardson as vice presidential candidate?

A couple of recent attacks from commentators on the political right have been pretty harsh on the governor. They seem pretty eager to tear into him.

Earlier this week this newspaper published a George Will column about the Russian invasion of Georgia, which said, “... Big events reveal smallness, such as that of New Mexico’s Gov. Bill Richardson.”

Will explained: “On ABC’s This Week, Richardson, auditioning to be Barack Obama’s running mate, disqualified himself. Clinging to the Obama campaign's talking points like a drunk to a lamppost, Richardson said this crisis proves the wisdom of Obama’s zest for diplomacy, and that America should get the U.N. Security Council ‘to pass a strong resolution getting the Russians to show some restraint.’ Apparently Richardson was ambassador to the U.N. for 19 months without noticing that Russia has a Security Council veto.”

In a blog called The Campaign Spot, the conservative National Review also criticized Richardson’s thoughts on the Russian situation. One post on Monday, referring to Richardson on CBS’ Face the Nation, was headlined “Bill Richardson, Making Obama Look Good on Georgia By Comparison.”

A few hours later, the same blog, in a post titled, “Bill Richardson Self-Destructs on CNN,” lambastes Richardson for saying “a President Obama will have a good, strong dialogue-oriented relationship with Russia, where these kinds of situations would not occur.” The first line of the blog post is “Team Obama has GOT to get Bill Richardson away from cameras.”

Pasadena bound: If you’re thinking that Richardson is holed up on the Fourth Floor frantically preparing for Friday’s special session, you are wrong.

Though he plans to be back later today, Richardson is appearing this morning in Pasadena, Calif., at a “breakfast fundraiser to benefit the Obama Victory Fund.” VIP tickets are $1,000, and requested contributions are $250 per person.

As is all too frequently the case, we didn’t learn about the governor’s out-of-state trip from his office, but from an out-of-state newspaper Web site, this time the Pasadena Star News, which published the story Wednesday.

Several hours later, the governor’s office e-mailed a news release saying Richardson was in California on Wednesday and today to attend the Border Governors Conference at Universal City. While in California, he also planned to meet with members of the Directors Guild of America in Los Angeles to talk about our state’s film industry, the official release said. But there was no mention of the Obama breakfast.

Meanwhile on the Senate front ... Democrat Tom Udall has been running lots of television ads the past couple of months. But not until this week have any of his spots mentioned the name of his opponent, Republican Steve Pearce.

The new ad, which opens with a photo of Pearce shaking hands with President Bush, never mentions Pearce without mentioning Bush. “George Bush and Steve Pearce. How much are they costing you? ... Steve Pearce voted 91 percent of the time with George Bush.”

Meanwhile, outgoing Republican U.S. Sen. Pete Domenici is scheduled today to formally endorsed Pearce — who surely hopes the Domenici endorsement does him more good than it did U.S. Rep. Heather Wilson, who lost to Pearce in the GOP primary.

“It is SO not a debate!” That’s what nondebate moderator Lorene Mills said about a candidate forum scheduled for Friday morning in Clovis at the New Mexico Municipal League’s annual conference. Apparently some Senate and Congressional candidates were threatening to skip the event if it was going to be an actual debate.

Not only will the candidates not interact with one another, they won’t have to be surprised by the questions asked. The candidates got those in advance.

The forum airs live at 8:30 a.m. on KENW-TV in Eastern New Mexico and KRWG-TV in Las Cruces. But Santa Fe folks will have to watch online. Mills said KNME-TV (Channel 5, Albuquerque) told her they would stream it on their Web page.