A version of this was published in The Santa Fe New Mexican
August 8, 2008

They were a mysterious explosion of comedy, kitsch, experimental theater, neo-Beat poetry, and pop culture run amok — backed by a supertight band navigating a turbulent sea of funk, hip-hop, metal, blues, tango, and whatever else floated by. They were funny and outrageous. They were insightful, often-poignant storytellers, celebrating hustlers, street people, burnouts, and even the occasional dental hygienist with love on her mind. Not only that, they were snazzy dressers — in a riot-at-the-Goodwill-store kind of way. 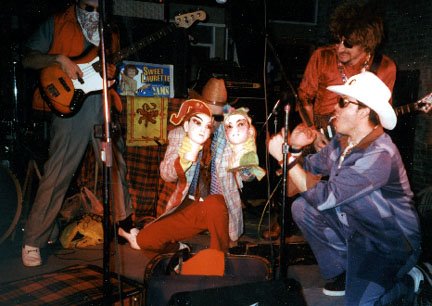 Hands down, The Gluey Brothers were the most original band to ever call Santa Fe their home. The two frontmen, King Hummus (Logan Richards) and MC Tahini (Jim Goulden) disappeared around the turn of the century, ending up in California, where they continued the path of The Gluey.

But they’re back. (Actually Tahini has been living in Santa Fe for the last year or so, though Hummus remains in Los Angeles.) They’ve got a cool new DVD, Rio Vista: Visuals, Volume One, which features Gluey music videos, footage from live performances from 1994 to 2005, a documentary, an interview, and assorted weirdness.

The DVD captures a big chunk of the old Gluey magic. There’s the Brothers’ 1998 national-television debut on Penn & Teller’s Sin City Spectacular (a short-lived FX network series and that’s no BS.) They do a seven-minute version of their signature tune and classic show opener, “Gluey Brothers Creep.”

One of my favorite Gluey Santa Fe songs is here — a 2000 live performance of “Piñon Lurker,” a high-charged guitar boogie about a guy you shouldn’t make eye contact with if you see him walking down Agua Fría. 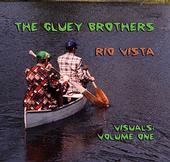 The DVD wouldn’t be complete without “Coffee Shop Tribute,” which features some of the Brothers’ funniest, if most obscure, trivia references: “I saw Reuben Kincaid with a shoddy perm” is one of my favorite lines in contemporary music. Unfortunately, the song is abbreviated, coupled with a snatch of “Freedom Rap.”

Mark Sommerville created a surreal Flash cartoon for “Stabbing Trilogy (in Five Parts).” My favorite part is the talking-catfish segment. Lots of Gluey tunes would make great cartoons, so I hope to see more of these.

In putting this together, Sean “Momma Bates” Browning reached way back in the Gluey archives. There are versions of “Donut Quota” and “Hash House Line” from the boys’ second performance (in Van Nuys, California, 1992), when it was just Hummus and Tahini with a drum machine.

The initial version of Rio Vista: Visuals, Volume One is a limited-edition run. Each copy is numbered and hand-signed.

If you missed out on these guys in the 1990s, it’s not too late. Let The Gluey Brothers creep into your life. They play at 8 p.m. on Friday, Aug. 8, at Santa Fe Brewing Company, 27 Fire Place. Admission is $8. It’s their first show here since they played at the Paramount, right before it closed.

* Can You Deal With It by Andre Williams & The New Orleans Hellhounds. This R&B codger — who wrote the ’60s soul classic “Shake a Tail Feather” — is apparently indestructible. He’s in his early 70s and has survived drug problems, homelessness, poverty, and obscurity. But he keeps cranking out hot and nasty albums.

In the past decade, he has teamed up with bands like The Jon Spencer Blues Explosion, The Dirtbombs, The Sadies, The Diplomats of Solid Sound, and now with a funky punky unit called The New Orleans Hellhounds to make some of the grittiest raunch-rock known to man. He might look like a nice, harmless old guy, but once he starts singing, you realize you’re flirting with danger.

Williams romps through a number of new songs about his favorite subjects: sex, girls, and sex. He gives dirty old men a good name. He saves his best for the first with the title song, in which he sings about “the rhythm of your booty” and “them great thunder thighs” as a metallic guitar plays tag with a diabolically slinky organ.

“Pray for Your Daughter” could almost be a Gary U.S. Bonds party-in-the-studio song — that is, if Bonds were partial to honking harmonicas and tunes celebrating crack whores. Meanwhile, “If It Wasn’t for You” is a soul ballad that sounds like something Van Morrison would love to sing. The saxes remind me of the band on Bob Dylan’s Street Legal.

On “Never Had a Problem,” The Hellhounds sound like a crazy mash-up of The Clash, The Who, and Ruben and the Jets, as Williams growls, “I ain’t never had a woman who did not kick me out. ... I ain’t never had a habit I could not live without.”

* The Diplomats of Solid Sound featuring The Diplomettes. You can find soul music in some of the strangest places. Here’s a band from Iowa — yes, that Iowa — full of punchy funk. 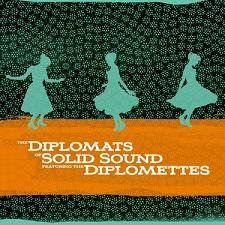 The Diplomats of Solid Sound started out as an instrumental group, sounding a lot like Booker T & The MG’s with a horn section. On this album, they’re joinea trio of female singers. Sharon Jones won’t lose any sleep over The Diplomettes, but these Iowa gals get the job done.

“Come on in My Kitchen” (not the Robert Johnson song) is a cool, grooving workout, while “Hurt Me So” is thick and smoky. There are actually two versions of that song. A faster-paced dub remix closes the album. But my favorite is the rocking “Budget Fro,” which gives organ man Nate “Count” Basinger and the horn guys a chance to shine.