A version of this was published in The Santa Fe New Mexican
August 15, 2008

A few years ago, I praised Stan Ridgway for releasing the DVD version of his album Holiday in Dirt, pointing out that his compilation of videos by various directors showed “hope for the beleaguered art form of the music video” and gave viewers “a glimpse at what might have been had MTV lived up to its original promise.” Indeed, music videos seem to be a dying art form. MTV hardly even shows them at all anymore. Holiday in Dirt-quality video projects are few and far between. 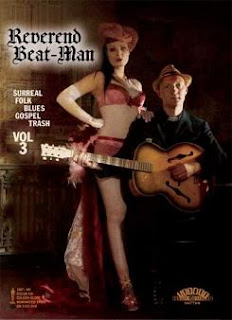 But the music video is not completely dead. From the neutral nation of Switzerland comes a character who calls himself Reverend Beat-Man, with a collection of videos under the aptly named title Surreal Folk Blues Gospel Trash, Vol. 3. Beat-Man is the founder, chief artist, and probably janitor of Voodoo Rhythm Records.

“I have to get up in the morning out of the bed, and I have to play guitar,” Beat-Man says in the 2006 documentary Voodoo Rhythm: The Gospel of Primitive Rock ’n’ Roll. “I have to go to the office and put out records that nobody buys. I just have to do it. I don’t know why.”

Using several directors — including himself — Beat-Man presents a series of weird morality plays involving Jesus, Satan, and lots of strippers. That eternal struggle of God and the devil provides two of the most satisfying stomp rockers here — “I See the Light” (not the Hank Williams classic, but a warped boogie re-imagining of “I’m My Own Grandpa”) and “Jesus Christ Twist.”

“Go down to your father’s place/Take a hammer and some nails/Nail your partner to the cross/Dance around and have some fun/Now do the Jesus Christ twist,” he growls in the latter song, which features black-and-white scenes of the crucifixion and rioting teen rockers. Blasphemy never sounded like so much fun.

In several videos, Beat-Man portrays a preacher. In the song “Jesus,” he goes down to the river to pray — and to baptize his flock. He also appears as a one-man band with guitar and bass drum.

But even more interesting is “I’ve Got the Devil Inside,” in which the preacher is tied up, tempted, and tormented by two sexy captors, one of whom wears a mask and eats fire. A similar theme is explored in “Our Girls.” As the liner notes explain, “Suppressed Guys need to learn about women. They experience Sex and Violence at a burlesque show. Their masters let them leave as Men.” Most of the action takes place in a room with red vinyl sofas and sparkling red curtains.

Beat-Man is portrayed by a puppet in “The Beat-Man Way” and by a child in “Clown of the Town.” But in one of the most striking videos, Beat-Man is never shown. “Meine Kleine Russin” features stop-motion animation using objects like a painted Mexican skull, a stuffed raven, fresh fruit, flowers, and a glass of red wine. The song sounds like Slavic folk influenced by the music of Voodoo Rhythm regulars The Dead Brothers. Beat-Man can call it “trash,” but the video is really quite beautiful.

In the closing credits, Beat-Man points out that all the videos were made with financial assistance from no one. The filmmakers and their crews — you get the idea they’re all friends and friends of friends of Voodoo Rhythm — volunteered their time to make it happen, which is pretty remarkable when you think about it.

At this point Beat-Man becomes something of a camp counselor for aspiring do-it-yourself artists. Repeating some of the same themes of “The Beat-Man Way,” the closing credits read, “I hope you did like those videos, and I hope there will be many bands & artists who are following this idea. Be creative and do whatever you wanna do. Don’t let anybody tell you that you are a no-count. Also if you are, just don’t give a fuck and do your own thing.”

If you like this kind of stuff, check out the Sonic Nightmares podcast featuring Reverend Beat-Man and Gringo Starr. 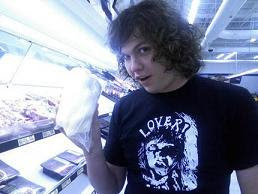 * Singles 06-07 by Jay Reatard. Young Mr. Reatard is from Memphis, but there’s something about his music that sounds vaguely British to me — early-David Bowie British. It’s rough and lo-fi but surprisingly melodic and hook-heavy. Reatard’s sound is like glam rock without any annoying glamor.

This is a collection of 17 songs that were previously available only on 7-inch vinyl records and an obscure EP from a bunch of tiny indie labels. Except for one guitar solo on the tune “All Wasted” (a song about zombies), all the instruments are played by Reatard himself. Only one song makes it past the three-minute mark, and many are under two minutes.

“Hammer I Miss You” sounds like a lost hit from the New Wave era. “Blood Visions,” which was also the title track of a Reatard album, is one of the more discordant punk rockers here, while the swirling guitars between the verses of “Feeling Blank Again” might remind you of Dinosaur Jr.

On the other hand, the acoustic “Searching fu” and the easy-to-sing-along-to “Don’t Let Him Come Back” could almost pass for folk rock. And the catchy “Haunting You” is, well, haunting.

This CD comes with a bonus DVD of raucous 2007 performances with Reatard and his band, plus an interview with a Dutch DJ.
at August 14, 2008