LAST OF THE RED HOT MAMAS 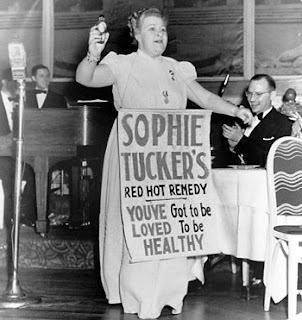 The great Sophie Tucker has sparked an interesting online debate.
It started in a New York Times review by Jody Rosen of a new Sophie box set that included this bit about Tucker's Vaudeville roots:

The bumptious, oversexed woman Tucker portrays in these songs has roots in the broad caricatures of blackface minstrelsy. Tucker knew that material well: she began her career as a “coon shouter,” slathering on burnt cork to sing songs full of watermelon chomping and other racist grotesqueries. The “Origins of the Red Hot Mama” CD package includes a rare photo from about 1907 of Tucker in blackface, on one bended knee, arms outstretched — a pose not unlike the one Jolson struck when performing his blackface anthem, “My Mammy.”

This prompted Sady Doyle to write a response in Salon.com headlined "Can a feminist hero do blackface?":

At first, her bossiness and appetite may have been acceptable because they promoted a stereotype: a big, sassy, sexual black woman was easy to laugh at. As Tucker became more powerful she began to present these qualities, not as attributes of a character, but as attributes of Sophie Tucker. And that, without letting Tucker off the hook, makes her worthy of lasting consideration.

It is crudely ahistorical to condemn—or to speak of "letting off the hook"—an individual singer for performing racial burlesque in 1908. Blackface minstrelsy was the pre-eminent form of entertainment in the United States for most of the 19th-century and remained wildly popular for at least the first few decades of the 20th. ... A growing scholarly literature has shown that minstrelsy was complex—a show business institution and a socio-cultural phenomenon far bigger and more complicated than any one practitioner. Yes, blackface comedy was racist and appalling, and people should never stop saying so. It is also a key to cracking the code of American culture.

(I wrote about "coon songs" a few years ago when I stumbled across some of them on the Free Music archive. That column is HERE )

Both writers agree that Tucker was an important figure in American music. Says Doyle,

Tucker, who started performing in the 1900s and continued until her 1966 death, prefigured the shift in gender roles that marked the 20th century. ... She was big, and proud of her weight; she aged, and flaunted her aging; she was unabashedly funny, carnal, and in control. In an age of pop starlets whose sexuality is Photoshopped and endlessly audience-tested, Tucker's brashness isn't just a history lesson, but a relief.

Whatever you think, Sophie Tucker was indeed a red hot mama!