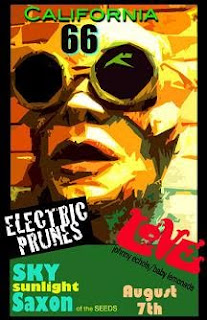 James Lowe of The Electric talks in the Lance Monthly about what went wrong with the big Electric Prunes/Sky Saxon/Love tour this summer. Saxon's death was only part of it!

By the way Lance monthly is put out by Dick Stewart, whose Lance Records was responsible for lots of garage, surf, psychedelic and Chicano rock in New Mexico in the 1960s, including "I Wanna Come Back from the World of LSD" by the Fi Fi Four Plus 2. There's lots of cool stuff in the Lance Monthly.
at September 03, 2009