A version of this was published in The Santa Fe New Mexican
September 25, 2009 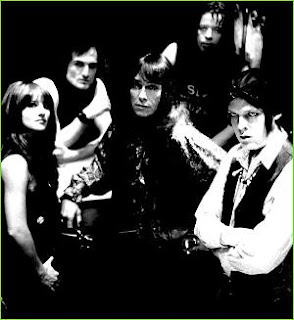 At last a “greatest hits” compilation by The Fuzztones. This is the first ever such collection — well, at least since 2005’s LSD 25: 25 Years of Fuzz and Fury.
But if you’re like me and don’t have that previous compilation, this new one, Lysergic Legacy, by Rudi Protrudi and his philosophers of furious fuzz — on the Cleopatra label, if anyone’s keeping score — is great. (If you do have the older album, take note: according to the Allmusic Guide, the two albums have 17 of the same songs.)

As lovers of the garage-rock sound know, “fuzz” is more than just an effect on the guitar. It’s a state of mind. It’s an attitude that The Fuzztones have championed since the early ’80s. Like their contemporaries, The Fleshtones and The Cramps, they sprang out of New York. But, along with the obligatory personnel changes, The Fuzztones have moved around. They were in California for awhile, but fell apart in the early ’90s after a major record label deal flopped. The Fuzztones regrouped this century in Europe. Protrudi and his fuzzy friends have been based in Germany in recent years.
Lysergic Legacy includes a couple of tunes (“Garden of My Mind” and “Third Time’s the Charm”) from the band’s most recent studio record, last year’s Horny as Hell — an album known for the addition of a horn section to the basic psychedelic/garage sound. There are also several original versions of songs that were reworked for Horny, like “Johnson in a Headlock,” which was originally released in 2004, and “Ward 81,” which goes back to the early ’80s.
If you listen to a particular handful of tracks here, you might think you have a garage-punk version of Frank Sinatra’s Duets. That’s because of some impressive guest appearances by ’60s Nuggets-era greats. “Get Naked” features the late Sky “Sunlight” Saxon of The Seeds. Mark Lindsay from Paul Revere & The Raiders belts out “Caught You Red Handed.” James Lowe of The Electric Prunes can be heard on “Hallucination Generation.” And the raga-rocking “All the King’s Horses” features Arthur Lee of Love and Sean Bonniwell of The Music Machine.
Sorry Mysterians fans — you won’t hear the artist formerly known as Rudy Martinez on “Look for the Question Mark.”
And there’s not one but two covers of songs by The Sonics, “Strychnine” and “Cinderella.” The Fuzztones did a tribute EP to this classic garage band from Seattle a few years ago.
A quarter century is a long time to be in the fuzz and fury game. But, judging by the sound of the more recent tracks on this collection, I’m betting Rudy Protrudi has many more years in him.
More sounds from the world garage: 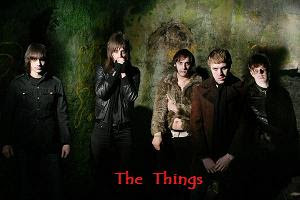 * Some Kind of Kick by The Things. This is a garage-punk band from Dublin that I stumbled across while looking for new kicks on eMusic. The quartet is led by singer Neilo Thing (the musicians should have gone Dr. Seuss on us, calling themselves “Thing 1,” “Thing 2,” etc.). This album, full of high-charged snot-rock, was released early this year.
Despite The Things’ Irish heritage, you don’t hear much of the shamrock shores in them. They sound nothing like The Pogues — and, thankfully, even less like U2. In fact, if anything, they remind me a lot of The Fuzztones, whom I bet they idolize. Both bands are heavy on the retro electric organ (in The Things’ case, sometimes played on a nice-and-cheesy-sounding synth) and basic garage hooks.
There are some cool spooky tunes like “Demon Stomp” (I can’t really make out the lyrics, except where Neilo says complimentary things about vampire girls) and “Psycho Lover.” You can hear the guiding spirit of The Doors’ Ray Manzarek in Ruairi Paxton’s keyboard solo on “Think” (try not to think of “Break on Through”). The jittery “Make Her Cry” name-checks Johnny Cash. And the slow-dance “Sandy” sounds like The Black Lips attempting country music.
But my favorite here is “Set Me Free,” in which Neilo seems to channel The Hives’ Howlin’ Pelle Almqvist. 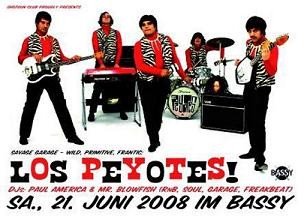 * ¡Cavernicola! by Los Peyotes. Here’s a reissue of an early album (from the golden days of 2005) by Argentina’s leading garage band. London’s Dirty Water records recently made the album available in a digital version on your popular download services (including Amazon, iTunes, and eMusic).
There are plenty of Peyotes originals on this record as well as Spanish-language covers of crazy old rock songs. The group resurrects the infamous “Fire” by The Crazy World of Arthur Brown, called “Fuego” here. Los Peyotes also do “Jack the Ripper” (Screamin’ Lord Sutch’s song, not Link Wray’s famous instrumental).
And like The Fuzztones (and like me), these Argentines are Sonics fans. Here they do “The Witch.”

Give el Diablo his due. Los Peyotes do a four-and-a-half-minute “Satanic Ritual” kicked off with a slow cheapo horror-movie organ solo. Two tunes, “El humo te hace mal” and “I Don’t Mind” would later appear on Introducing Los Peyotes, which was released last year. And the “secret” bonus song at the end of “The Witch” (no, it’s not really a 10-minute version of the song) is “Scream,” a song that also appears on Introducing.
at September 25, 2009