This Show Is dedicated to Santa Fe's Number One Music Fan, Kenny "Canuto" Delgado
For Info on next Friday's Benefit for Kenny CLICK THIS OPENING THEME: Let it Out (Let it All Hang Out) by The Hombres
Ways of a Man by Guitar Shorty
Jenny i Read by Concrete Blonde
I'm Now by Mudhoney
La Bamba by The Plugz
Tube Snake Boogie by ZZ Top
Heart Full of Soul by The Yardbirds
Burnin' Inside by King Khan & The Shrines
It's a Sunny Day by The Dynamites featuring Charles Walker 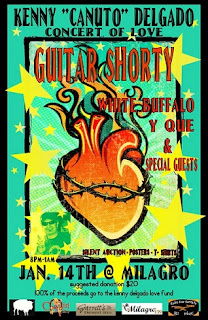 Go Ahead and Burn by Barrence Whitfield & The Savages
Let's Get a Groove On by Lee Fields
Bitch, I Love You by Black Joe Lewis & The Honeybears
B.O.O.G.A.L.O.O. by The Diplomats of Solid Sound
Jukebox Boogie Woogie Chick by Snookum Russell
Hot Skillet Mama by Yochanan
You Can't Judge a Book by Bo Diddley
Lonely Lonely Nights by Johnny "Guitar" Watson
Get Your Clothes and Let's Go by Crown Prince Waterford
Red Dress by T-Model Ford & GravelRoad