A version of this was published in The Santa Fe New Mexican
January 14, 2011 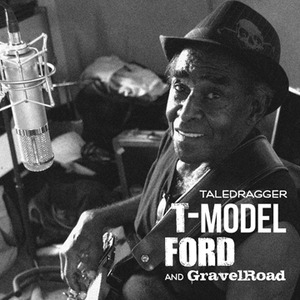 Junior Kimbrough is dead. R.L. Burnside is dead. Paul “Wine” Jones is dead. Robert Belfour is still alive as far as I know, but he hasn’t recorded anything in nearly a decade. It looks like the last man standing among Fat Possum’s old stable of Mississippi Hill Country blues giants is the mighty James Lewis Carter Ford, better known as T-Model Ford.

He’s about 90 years old, depending on which birth date you believe. He has a pacemaker. He’s had a stroke. But the former truck driver is still on the road, and he’s still recording, as his new album, Taledragger, attests.

Released on the Alive/Natural Sound label — somewhere along the line, Fat Possum ceased to be blues label — Taledragger teams T-Model with a young Seattle blues-rock trio called GravelRoad, which also appeared on T-Model’s previous record, The Ladies’ Man. (I bet The Black Keys would have walked over their grandmothers’ graves to get this gig.) The band is fortified on some tracks by a baritone sax, organ, and piano.

I predict that fans of T-Model’s Fat Possum albums may be a little disappointed with Taledragger. That is based on my own initial reaction to the album. T-Model was able to create more mayhem, aided on most cuts only by his drummer “Spam” (Tommy Lee Miles) on albums like Pee-Wee Get My Gun and You Better Keep Still.

But give it a second listen (and third and fourth). There’s plenty to like about Taledragger.

Guitarist Stefan Zilliloux gets psychedelic on the cover of Howlin’ Wolf’s “How Many More Years.” It reminds me of the basic sound of Muddy Waters’ controversial Electric Mud album all those years ago.

Another highlight is “Comin’ Back Home,” which is based on Hubert Sumlin’s guitar hook on Wolf’s “Smokestack Lightning.” Saxman Brian Olive (also a co-producer of the album) gives the tune noir textures.

It’s the same with whoever is playing the organ on “Someone’s Knocking on My Door.” This song sounds much like the crazy, chaotic version of “Long Distance Call” on The Super Super Blues Band, which featured Muddy, Wolf, and Bo Diddley. (It’s one of my favorite albums of all time.)

And if GravelRoad sounds a little too restrained on some tracks, the group cuts loose on a joyous eight-minute version of “Big-Legged Woman.” (The best version of this one, though, remains Jerry Lee Lewis’ leering romp.)

Many of the songs here are covers, and some are pretty close rewrites of blues standards. For instance “Same Old Train” sounds a lot like “Mystery Train,” even though T-Model starts out calling for his “big-leg woman.” “Red Dress” is basically a mutant cousin of Tommy Tucker’s “High Heel Sneakers.”

I’m not sure who wrote the most moving song on the record — “I Worn My Body for So Long.” T-Model makes it a personal testimony to his age and mortality. He sings it like a lonesome ghost, while the slide guitar evokes images of Mississippi graveyards. It reminds me of Kimbrough’s “Done Got Old.” But T-Model sounds more defiant.

Also recommended:
* In the Nuthouse Now by Angry Johnny & GTO. This allegedly is a children’s album. It’s perfect music for the Children of the Damned. 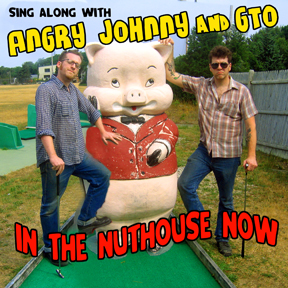 Angry Johnny, who used to play with a band called The Killbillies, first came to my attention in the ’90s with his album Hankenstein, a work distinguished by featuring not one but two songs about chain-saw murders. There are no chain saws here, but the title character of the song “Wendell” is pretty handy with a garbage disposal.

The Killbillies are apparently gone now. It’s a loss. It was a bashing little band. But one faithful Killbilly crony, GTO, aka Goatis T. Ovenrude, plays mandolin and banjo as well as doing a bizarre falsetto response to Johnny’s calls. (Under his real name, Paul Amos, GTO did the soundtrack to Gimme Skelter, a slasher flick shot in New Mexico a few years ago.)

Nuthouse is full of wicked tales of crazy violence, boozing, and other symptoms of degeneracy. But most of these are from a child’s eye view, so abuse and neglect are big themes.

In “Drinking Daddy’s Beer,” a kid explains, “Mommy’s at the bar and daddy’s in jail/So I’m drinking daddy’s beer so it don’t go stale.” The ditty “Diggin Holes” is about innocent childhood endeavors: “Settin’ snares in the woods, in the woods/Gonna catch me a tiger or a mountain biker.” Most disturbing is “Kittens,” a minor-key “folk” ballad about daddy drowning his son’s kittens — and other household residents.

You know a record is way out there when the most “normal” song on it is a fairly straight take on “Knoxville Girl,” a venerable murder ballad about a guy who kills his girlfriend, who pleads for her life. I’m just waiting for Angry to surprise us and do a “tribute” album of John Denver covers. Don't forget the benefit for Kenny "Canuto" Delgado Friday night at Milagro. Guitar Shorty, White Buffalo and Y Que will be there.

It was cool that City Councilor Miguel Chavez plugged the benefit at the City Council meeting Wednesday night. Thanks, Miguel.