A version of this was published in The Santa Fe New Mexican
January 7, 2011

The cover says it all. Right beside a sepia photo of a kid in a cowboy outfit, there’s a list of subjects that are covered on the first volume of a strange series of musical compilations called Twisted Tales From the Vinyl Wastelands:

Yep, my kind of music. 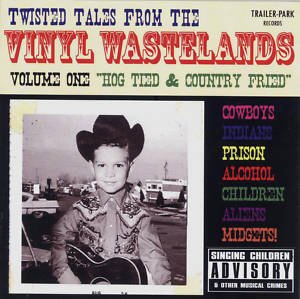 And indeed, in Twisted Tales you’ll find story songs, answer songs to popular hits of the day, and novelty songs. There are topical songs ripped from the headlines of the time and politically incorrect songs — some probably racist, or at least shockingly unenlightened. The tracks are full of sex.

But there are usually tragic consequences attached to lovemaking. It’s the same with liquor and drugs or being a hippie.

Each CD contains about 30 songs. The lion’s share of the artists are obscure — Dude Martin, Duke Mitchell, and Johnny Wildcard. However, there are a smattering of tunes by artists whose names you might recognize: Homer and Jethro, Faron Young, Benny Joy, Lee Hazlewood, and Freddie Hart — Spike Jones even makes an appearance on Volume 7.

You can’t find these at most places where CDs are sold. They are not on Amazon or iTunes or even eMusic. There’s no website for Trailer Park Records and no mailing address on the CDs themselves. But you can find them through the magic of eBay or on the British site  No Hits Records. Here’s a look at all eight:

*  Volume 1: Hog Tied & Country Fried. This is a wonderful introduction to the Twisted world. The promised aliens are here, starting with “The Martian Band” by Scottie Stoneman (Martians playing the autoharp?). There’s some sexist joy at the expense of women’s lib in Benny Johnson’s “Burn Your Bra,” while Kirk Hansard visits a “Nudist Colony.” Tommy Scott & Scotty Lee cast out devils with “Exorcism.” Hank Penny examines racism in “The Strong Black  Man” (which owes a debt to Jimmy Dean’s “Big Bad John”).

And yes, there are singing children: Duane Williams, who chirps a weird tune called “The Devil Made Me Do It,” and Bill Moss Jr., who recites “When Teddy Bear Took His Last Ride,” a maudlin answer song to Red Sovine’s even more maudlin truck-driver hit. 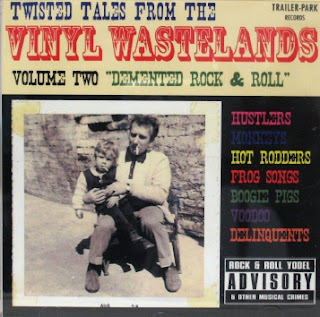 *  Volume 2: Demented Rock & Roll. These are long forgotten — if indeed ever known — records from rock’s infanthood. There are singing frogs and dancing pigs and even one for the Alamogordo chimps in “Missile Monkey.” There are also some questionable tunes about people from foreign lands, like “Tokyo Queen” by The Charlie Bop Trio and, even worse, “Chinese Rock ’n’ Roll” by Bobby Gregory. But at least one of the songs about Mexicans, “Pancho Rock,” is done by an actual Mexican American, the great Lalo Guerrero.

* Volume 3: Beatin’ on the Bars. Here we get crime songs and prison laments, a major subgenre of real country music. I’m not sure why executed California murderer Caryl Chessman struck such a chord with country musicians. He’s the title character of a song by a guy called “Country” Johnny Mathis and the inspiration for Jimmy Minor’s “Death Row.” But the most twisted tale here is Horace Heller’s “Ed’s Place,” a first-person confession of a double homicide of passion (“I didn’t mean to kill her. ... But I meant to kill him!”). 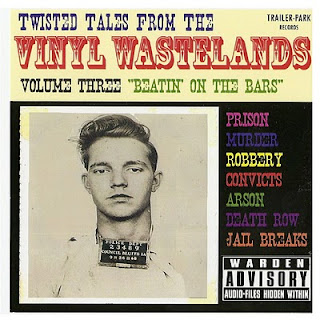 *  Volume 4: Hippie in a Blunder. Hippies had a lot of the country worried in the late ’60s, with all their protesting, long hair, drugs, and love-ins. The title song by Johnny Bucket makes fun of hippies’ appearance and stupidity, but I prefer Smokey Harless’ “A Place for Them Called Hell,” because he’s not just bemused by the longhairs, he’s pig-bitin’ mad.

There are lots of drug songs on this collection — psychedelic cautionary tales, such as ”LSD” by Wendell Austin, and reefer- madness tunes like “Marijuana, the Devil’s Flower” by Johnny Price.

*  Volume 5: Last Kiss of the Drunken Driver. If you’re a fan of “Teen Angel,” “Tell Laura I Love Her,” and all those classic teenage-death songs of the ’50s and early ’60s, this volume is for you. It’s full of fiery car crashes and other tragedies. Most are unintentionally hilarious in their earnestness. But there’s black humor too, such as Jimmy Cross’ “I Want My Baby Back” and Louie Innis’ “Suicide.” 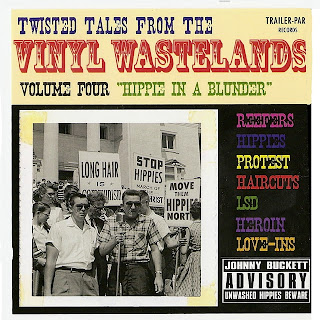 *   Volume 6: Strange Happenings in the Boonies. More from the hillbilly Bizarro World. The aliens are back with “Swamp Gas” by The Space Walkers. “The Devil, My Conscious, and I” by Billy Barton features the craziest devil voice you’ve ever heard. “Sitar-Pickin’ Man” by Bobby Zehm is about a Calcutta cowboy and features an electric sitar.

And “Teddy Bear” is back. There’s a cover of the original Sovine hit by Hank Hill — yes, that Hank Hill — and “Teddy Bear’s Epitaph” by John Texas Rocker. Sovine himself shows up with “The Hero,” a tearful tribute to John Wayne.

There are more songs with Asian stereotypes here — “Rockin’ China Doll” by Gene Ross, “Japanese Skokiaan” by Spike Jones, and “Cholly Oop,” which is offensive to Chinese people as well as to cavemen. 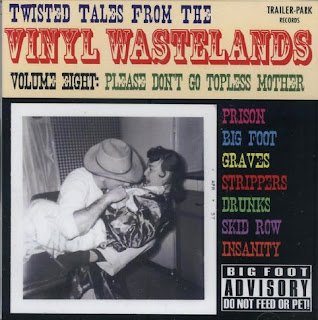 But the most disturbing song is Cousin Zeke’s “Lover Man Minus Sex Appeal.” Let’s just say he looses his sex appeal in a surprising way.

Twisted Enchilada: My latest episode of The Big Enchilada podcast includes a 20-minute sampler of songs from Twisted Tales From the Vinyl Wastelands. And I’ll play some Twisted songs Friday night on The Santa Fe Opry, KSFR-FM 101.1, starting at 10 p.m.
at January 06, 2011