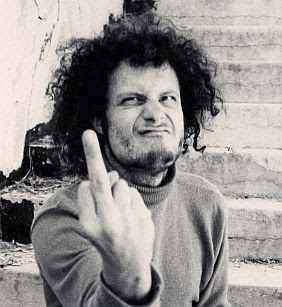 Wild Man Fischer is dead. He was 66. His name was Larry.

The mentally ill street musician "discovered" by Frank Zappa died of a heart attack in Los Angeles on Thursday.

Like other  musicians who have struggled with mental illness -- Roky Erikson, Daniel Johnston, Wesley Willis, Brian Wilson, Sid Barrett -- watching or listening to Wild Man Fischer made you uncomfortable. Are we laughing with him or at at him? Are we exploiting the poor guy? Are we feeding his demons when we laugh and cheer him on?

And yet who could be unaffected when, hearing him sing "My Name is Larry," by his recreation of conversations with his family, most of whom he portrayed as patronizing him, trying to ignore him, fearing him? And how can you not feel the raw spirit in his manic performance?

Below are a couple of videos by which to remember this troubled soul, as well as a trailer for the documentary dErailRoaDed.