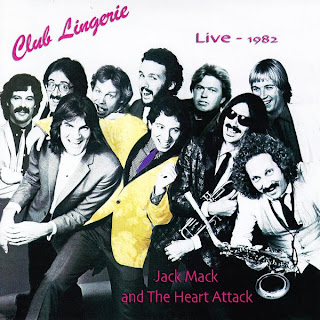 * Jack Mack & The Heart Attack: Club Lingerie 1982. It was almost 30 years ago that I took a trip to California with my pals Alec and Rich. The stated purpose of the trip was to promote my then-new album Picnic Time for Potatoheads. But it was also a time to get out of the insular world of New Mexico and check out some music.

The most memorable music we saw on that trip included The Waitresses (popular at the time for their New Wave hit "I Know What Boys Like") and an obscure soul-revival group that nobody back home had ever heard of -- Jack Mack & The Heart Attack. We saw them at what I guess was their favorite haunt, Club Lingerie on Sunset Boulevard in Hollywood.

These were the days when the sounds of Stax, Motown, Al Green and whatnot were way out of fashion. In fact, by the next year, the Motown-heavy soundtrack of The Big Chill would come to symbolize yuppie nostalgia and a sort-of rebuke to anything that came after. ("There is no other music, not in my house," Kevin Kline's character  declared indignantly in the movie.)

But Jack Mack and the boys weren't mere nostalgia merchants. Though it was obvious they loved the era they emulated, they were not a covers band. If they did any covers at all that night, they were so obscure I didn't recognize them.

And most importantly they played with an energy that set them miles apart from your usual bar band playing covers of "Soul Man" or "I Heard it Through the Grape Vine." I don't actually hear any overt punk or New Wave influences, but the Club Lingerie crowd, which was made up largely of early '80s Hollywood punks, loved it. It would be cool if there was a time machine and you could send Black Joe Lewis or JC Brooks or King Khan back in time to sit in with The Heart Attack.

I guess I was feeling a little neo-Big Chill nostalgia one recent night when I stumbled on this album while Googling Jack Mack & The Heart Attack. I was overjoyed when I saw it on eMusic. Though as the songs were downloading I feared the music would not match my memory. But I was far from disappointed. In fact, listening to "Wonderful Girl" took me right back there.

Weird Footnote: There's still a band called Jack Mack & The Heart Attack working today.  I'm not sure if any of the original players are in in, but there's a new "Jack Mack." The singer back in 1982 was a guy named Max Carl Gronenthal. After leaving The Heart Attack, he went on to sing with .38 Special and currently is singing with the current version of Grand Funk Railroad. 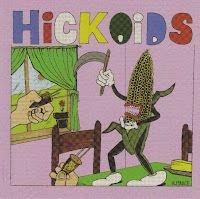 * Corn Demon by The Hickoids. "Cowpunk" is a term that gets thrown around quite a bit, but way back in the '80s, this Texas group helped get the concept off the ground. No, it's not just redneck parody -- though, as the Hickoids show on "Driftwood 40-23," a tender country lust song about a romance born in a truckstop restroom (you can hear it on my latest Big Enchilada episode) had a good knack for that sort of thing when they want.

But this collection, which features The Hickoids' first album We're In it for the Corn plus an early EP, basically is downhome ferocious rock 'n' roll played with hillbilly abandon. this is one dangerous rodeo.

One of my favorites is "The Longest Mile," which changes tempo at least a couple of times but maintains a fiery intensity even during the slow part. "Corntaminated" is an insane hoedown that starts out with a chicken-scratch guitar. I'm not sure what "Animal Husbandry" is about, but I assume it's something unwholesome. But you gotta love the stomping, twang-infused guitar slop.

Corn Demon mostly focuses on original tunes, ) but there's some wild covers too. Carl Douglas' "Kung Fu Fighting" becomes "Korn Fu Fighting" while Elvis' "Burning Love" becomes a hunka hunka crazy ride. One of my favorites here is the instrumental "Willamanza," which is a high-voltage melding of "The William Tell Overture" and, you guessed it, the theme from Bonanza. And perhaps the most radical cut here is the irreverent, screaming version of The Eagles' (!!!) "Take it Easy."  No, The Hickoids don't take it easy, but they take it. 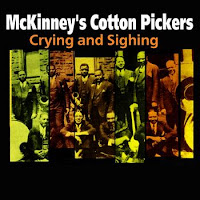 * Crying and Sighing by McKinney's Cotton Pickers. This is what big band jazz sounded like back in the 1920s and '30s. Lots of horns of course, but also a prominent banjo and frequent vocals.

The Cotton PIckers were a black group that started out in in 1926, led by drummer William McKinney but led by Don Redman, a former member of the Fletcher Hendeson Orchestra. At various points in its history, members of the Cotton Pickers included Fats Waller on piano, Coleman Hawkins on clarinet and tenor sax, Doc Cheatham on trumpet  and Benny Carter on clarinet and alto sax.

I actually downloaded this album because it contains a jazzy version of
"Beedle Um Bum," a song usually associated with jug bands and Tampa Red. It's credited to gospel songwriter Thomas Dorsey, in his earlier incarnation as "Georgia Tom" was Red's piano player. "Down in Memphis, Tennessee, lives a girl named Cindy/ With a meat shop on her block, she's always got the gimme ..."  But's not the only Tampa Red/Georgia Tom tune in this collection. Also there's great versions of "It's Tight Like That" (one of Red's signature songs) and "Selling That Stuff." 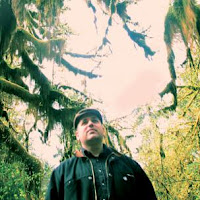 * Whatever I Want by Mark Sultan. " I can see how a one-man band set-up can leave a bad taste in someone’s mouth. ... I hate one-man bands. Seriously. There are only a couple I like, and those few I do like I like because I 'don’t consider them one-man bands, but rather musicians who manipulate minimal gear and sounds and transform it and themselves into something special and transcend what they present. "

That's what Sultan --  who has made a name for himself partly by his work as a "one-man" band"  -- said a few months ago on his website. Thus, it's fitting that Sultan's latest work doesn't have a typical one-man band feel.

He uses guest musicians including pals from The Black Lips (with whom Sultan plays in the garage/gospel supergroup The Almighty Defenders) and Dan Kroha of The Gories.

Basically, Sultan does what he does best -- melodic (mostly) tunes colored by doo-wop, rockabilly and primitive rock 'n' roll. My favorite so far is "Blood on Your Hands," which sounds like a weird team-up of Danny & The Juniors and some mid '60s garage band.

Also notable is "Just Like Before," on which Sultan goes right for the doo-wop jugular.

Whatever is one of two Sultan albums released last fall. (I'll talk about the other, Whenever I Want It, next month. There's also a CD called Whatever/Whenever that consists of music from both albums.)

Plus
A bunch of Christmas songs for The Big Enchilada podcast or Terrell's Sound World, or both.

* "Black Santa" and "Sock it to Me Santa" by King Salami & The Cumberland 3
* "A Christmas Duel" by The Hives and Cyndi Lauper
* "Oh Come All Ye Faithful" by Los Straitjackets
at January 16, 2012