Terrell's Tuneup: Have Some Freebies

A version of this was published in The Santa Fe New Mexican
Jan. 13 2012

So you’re broke after the holidays, but you want to keep up on some new groovy tunes? You’ve come to the right place. Because I’m your friend (I’m not like the others), I’m going to point you to some recent digital albums or digital EPs that are absolutely free and just a few clicks away.

Two of these three albums are promotional gifts from Scion, a line of cars from Toyota. Scion has teamed up with Vice magazine to sponsor a lot of free music projects — music downloads, concerts (such as the Kid Congo Powers show in New York I saw a couple of years ago), videos, and even a festival.

One of Scion’s loves is modern garage music. Why do they do it? “Scion’s commitment to artistic expression provides a platform for passionate artists to focus on developing their art and exploring the endless possibilities,” is what the website says.

Personally I think a couple of junior executives in the marketing department pulled a fast one on the senior suits and, so far, have gotten away with it. Without promoting or disparaging their fine product, I’m glad they’re doing it.

Here’s what I think about these offerings: 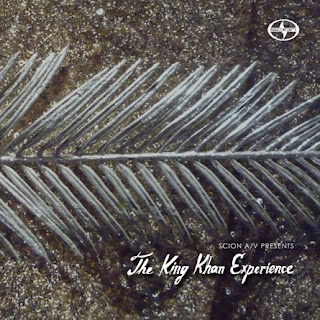 *  The King Khan Experience. This is His Highness’ first album with his new band. The overall sound is closer in style to Khan’s soul revue, The Shrines, than it is to the stripped-down records he’s made with The King Khan & BBQ Show or The Tandoori Knights. There’s lots of variety in the nine tracks.

The album starts out with “Bob Log Stomp,” a tribute to the helmeted one-man band from Arizona. With a rubbery slide guitar and cheesy organ in the background, Khan sings sly references to Log classics like “Boob Scotch,” “Drunk Stripper,” and “Log Bomb.” This is followed by a soulful little workout called “Fa Fa Fa (Love Song).”

The high-charged, not-quite-funky “I Got Love” and the raucous “Knock Me off My Feet” could almost be Shrines outtakes. It was only on my second listen that I realized that there was no horn section on either song. I suppose a little sax would be nice here, but it’s certainly not necessary. There is a sax in “Dr. Ruin Your Life,” a slow song that evokes memories of Otis Redding.

Khan stretches a little in “Come Levitate With Me.” A jazzy flute that might have been born in a Gil Scott-Heron song dominates this tune. In “Keep it Simple, Stupid,” Khan draws on his Hindu heritage and droning psychedelia. Here Khan almost sounds like George Harrison in his Ravi Shankar phase. Go to www.scionav.com/collection/851 to download the King Khan album. 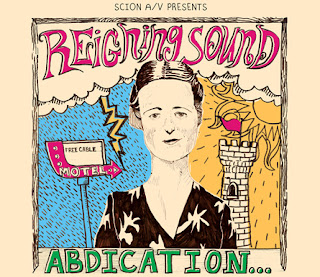 *  Abdication ... For Your Love by Reigning Sound. While this group isn’t very well known among the general population, in the garage-punk universe, the musicians are considered pretty huge stars. They’re led by Greg Cartwright, the artist formerly known as “Greg Oblivian” of the dearly departed Memphis band The Oblivians.

Like that older band, Reigning Sound can rock with thunder; it proves that right from the start with the opening song, “Lyin’ Girl.”

But the band also proudly displays its Memphis soul heritage (even though Cartwright moved to North Carolina a few years ago and picked up new band members there), showing the influence of classic Stax/Volt sounds and Al Green, whose current RS member Dave Amels seems to echo through his slinky keyboards.

Cartwright and company, even in their most rocked-out tunes, are conscious about creating melodic hooks. And they aren’t shy about sprinkling downright pretty melodies into their sets. On this album “Eve” fills that bill. It’s an irresistible slow dance.

One of my favorites here is the up-tempo “Watching My Baby.” With its refrain “Watching my baby get ready, she’s going out tonight,” it sounds as if Cartwright is making a play for the daughters of all the middle-aged women who swooned over Eric Clapton’s “Wonderful Tonight.”

Find this one at www.scionav.com/collection/852  .

*  An Introduction to The Revelations featuring Tre’ Williams. This album didn’t come from Scion. 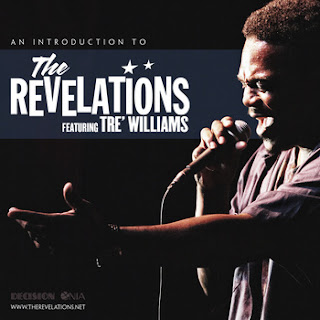 Unlike Reigning Sound or King Khan, I’d never heard of Williams or The Revelations. Until, that is, last November, shortly after I got home from the Black Joe Lewis & The Honey Bears show at Santa Fe Sol Stage & Grill. After I posted a video of a song from the show on Facebook, the bizarre demons who determine which ads go where on that site decided to put a little blurb on my page.

I forget the exact wording, but basically it said, “If you like Black Joe Lewis, you’ll love The Revelations.” I’ll admit I was cynical at first. Most such recommendations are so off base they’re ridiculous. But I thought it might be good for a laugh, so I bit.

As it turned out, even though this neo-soul group from Brooklyn isn’t quite in the same league as Black Joe — the band members don’t have his intense energy or humor — these guys aren’t bad. In fact Williams and The Revelations would sound right at home with Sharon Jones, Charles Bradley, and others on the New York Daptone label.

Most of the songs here come from The Bleeding Edge and Deep Soul, previous Revelations albums, though there also are some cuts from the band’s latest album, Concrete Blues, which was released around the same time as this sampler.

Another worthy tune is the opening song “Graceful Bow,” which sounds closer to Al Green than to Reigning Sound.

And here's Tre Williams & The Revelations


And for the hell of it, here's King Khan & The Shrines when I saw them at the 2008 Pitchfork Festival in Chicago. (I didn't shoot this video, but I was there)