I probably won’t be here to collect, but I’d be willing to bet that in 50 years, country singers — whatever in Sam Hill country music looks like in 2062 — will still be making albums of nostalgic old country songs.

And there’s a reason for that. Those old songs still pack a powerful punch. It’s not that any of the venerated masters shunned commercialism. Far from it. They wanted to make hits. But they did so without writing songs that sounded as if they were created by committee and the recordings checked by focus groups. Even though you’ve heard songs like “I’m Moving On” or “Footprints in the Snow” a jillion times, if a singer has a little soul, he or she can still cover those tunes and they will connect. 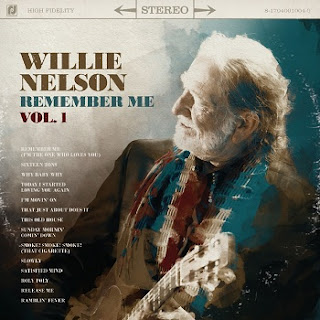 And Willie Nelson and Jimmie Dale Gilmore have a lot more than a little soul. Both of the latest releases by these Texas troubadours are worthwhile experiences, even if most the songs on each are very familiar.

Nelson’s Remember Me, Vol. 1 is his second album in the last couple of years consisting of hillbilly classics.

His T Bone Burnett-produced Country Music consists mainly of bluegrass, folk, and backwoods gospel songs. The new album is slightly more modern, covering country songs going back to the 1940s and one from the late ’80s — Verne Gosdin’s “That Just About Does It.” There are songs by Nelson’s contemporaries like Haggard and Kris Kristofferson, as well as tunes made famous by his heroes such as Ernest Tubb, Webb Pierce, and Bob Wills.

Some are familiar, some are a little obscure. But there’s not a bad one in the bunch.

The arrangements, for the most part, are simple and basic — lots of fiddle and steel — though Nelson nods to the early-’60s Nashville sound on “Release Me,” which has vibes, a jazzy guitar, and a soft female chorus. With the exception of harmonica player Mickey Raphael, the band here is not Nelson’s usual Family Band, but the musicians serve him well.

The title track, which opens the album, is a Tubb song — the first version I ever heard was by Dean Martin back in the 1960s. No, it’s not the same as “Remember Me (When Candle Lights are Gleaming),” which Nelson sang on Red Headed Stranger. It’s a midtempo tune, maybe a little slow to kick off an album. But it draws a listener in, and that fiddle by Aubrey Haynie sure sounds sweet. Plus, the bridge offers a reassuring promise to Nelson’s listeners: “And through all kinds of weather you’ll find I never change/Through the sunshine and the shadows, I’ll always be the same.”

Wilson does a great finger-poppin’ take on Tennessee Ernie Ford’s greatest moment (written by Merle Travis), “Sixteen Tons.” And he does a jumping cover of the Tex Williams western-swing novelty tune “Smoke! Smoke! Smoke! (That Cigarette),” which most people my age probably first heard played by Commander Cody and His Lost Planet Airmen in the early ’70s. Nelson’s version is fun, though he’s not really known for smoking nicotine.

Speaking of western swing, Nelson’s take on “Roly Poly” is perhaps the best version of this Texas Playboys song I’ve ever hear. Much of the credit goes to drummer Eddie Bayers who pounds like a maniac.

The prettiest tunes have to be “Slowly,” an early-’50s Webb Pierce song, along with “Satisfied Mind,” a Porter Wagoner signature tune (though my favorite version is the one by The Byrds).

Nelson, who is pushing 80, gives these songs a sagely quality. I’m happy he’s still singing them.

Like Nelson, Gilmore is an excellent songwriter, but he loves playing the songs of his country forefathers. His 2005 album, Come on Back, which showcases his space-alien voice, cosmic spirituality, and honky-tonk sensibilities, consists of dusty old country songs that his dad loved.

His latest, Heirloom Music, is more of a folk/blues/old-timey venture, an acoustic string-band affair with wonderful old songs like “Deep Elum Blues,” “Foggy Mountain Top,” and The Carter Family’s “I’m Thinking Tonight of My Blue Eyes.”

Gilmore and his band draw from bluegrass sources such as Bill Monroe (“Uncle Pen”), Flatt and Scruggs (“If I Should Wander Back”), and Rupert Jones (“Footprints in the Snow”).

He teams up for this album with The Wronglers, a northern California band — the album is actually credited to The Wronglers with Jimmie Dale Gilmore. Warren Hellman, who founded the Hardly Strictly Bluegrass Festival in San Francisco, played banjo with the group. He died last month.

The main intersection with Nelson’s latest is a Bob Wills cover, “Time Changes Everything,” though Gilmore performs it as a sad country ballad, not as a western-swing tune. In an interview on NPR's  Fresh Air last year, Gilmore said he had found a bluegrass version of the song by Monroe, though he first came to it via Johnny Cash’s cover.

My favorite tune here is Charlie Poole’s version of “Frankie and Johnny,” which is titled “Leavin’ Home.” It’s the happiest-sounding song about domestic violence ending in murder you’ve heard. You almost believe that a pistol goes rooty toot toot.

Also commendable is The Wronglers’ version of the hobo fantasy “Big Rock Candy Mountain.” Hellman and Gilmore trade off on lead vocals. Maybe it’s not as heartwarming as the late John Hartford’s live version in the movie Down From the Mountain, but it’s up there.

Gilmore sounds like he enjoyed every second on this album. I did too.


Check out a performance by Gilmore with The Wronglers on Mountain Stage: