There's a free (!) show at the Santa Fe Railyard Park this Saturday (Sept. 15). The headliners are The Heartless Bastards. They're ok, but I'm far more excited about the opener, Bob Log III. 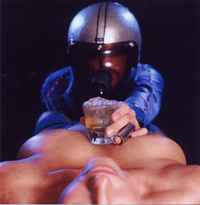 For those unaware of Mr. Log, he's a one-man band from Arizona who plays a mean slide guitar, bass drum to accompany his distorted vocals. (He wears a motorcycle helmet on stage.) His sound is so primitive he makes the Jon Spencer Blues Explosion sound like the New York Philharmonic. He's been on two of my favorite labels -- the original Fat Possum Records back when it was the most exciting blues label around and, more recently Voodoo Rhythm, the Swiss company that released his latest album My Shit is Perfect in 2009. (Birdman Records later released it in the U.S.)

I've never seen his solo act, but back in the '90s I saw him with his old band Doo Rag at a Lollapalooza. I was impressed.

The show starts at 6 p.m. in the Railyard.

Check out the Bob Log video below -- and, just for the hell of it, some Doo Rag below that.