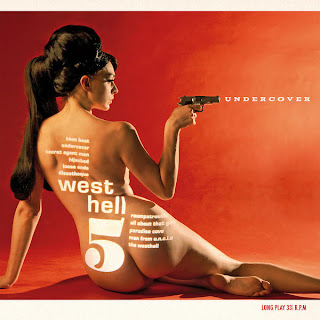 * Undercover by West Hell 5. On my recent trip to Amsterdam, I planned to go to a party put on by The Amsterdam Beat Club at a Club called Paradisio. (I was alerted to this by fellow GaragePunk podcaster Suzanne of Rock 'n' Roll Rampage.)

One of the bands playing was West Hell 5, an instrumental group featuring sax, guitar and organ. They call their sound "Mod & Crime," which is inspired by "old spy-fi & crime-soundtracks, 60's groove jazz, Vegas Grind and early rhythm 'n blues." It's a cool, greasy sound.

Most the tracks are original though they do cover The Man from U.N.C.L.E. theme and "Secret Agent Man" (though I still like Junior Brown's cover of that one the best.)

Long story short, I missed the show at Paradisio. For some reason I thought it was on Friday. It was on Thursday. At least I have this album. 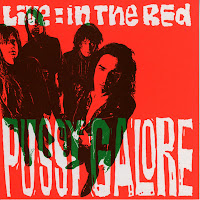 * Live in the Red by Pussy Galore. Before he detonated the Blues Explosion, Jon Spencer was the frontman for this rocking little unit from Washington, D.C.

They reveled in crazy noise, but they were far more fartsy than artsy. Listen close enough and you can hear strains of rockabilly and Rolling Stones but all on distorted overdrive. (Don't listen too close or you'll blow an eardrum.) Every song they ever tackled was a party out of control.

This was Pussy's last concert, recorded at CBGB's in 1989. If there was any petty onstage bickering that night, they left it off this album. But Spencer and the boys don't sound like a group at the end of its rope here. They play their songs, more than half of which are from their greatest album Dial "M" for Motherfuckerwith pride and spirit. 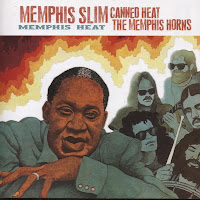 * Memphis Heat by Memphis Slim & Canned Heat. One of Canned Heats most remembered records was the double album they did with John Lee Hooker, 1971's Hooker 'n' Heat. Far less known is this team-up with piano man Memphis Slim.

"I want everybody to know just who I am," Slim sings in the title song. "Me and the Canned Heat are gonna have a little jam." And indeed they did.

This collaboration includes two sets of sessions in Paris, (where Slim was living at the time) in 1970 -- Heat at its prime -- and 1973, which includes contributions from The Memphis Horns.

While the horns add an extra dimension, they represent a departure from the guitar-centric boogie usually associated with Canned Heat. Still, the interplay between Slim's piano and Henry Vestine's guitar makes this a treat for any blues fan.

Slim handled all the vocal responsibilities except on "Five Long Years." (I'm not sure who sang it. It doesn't sound like Slim or Bobby "The Bear" Hite, the band's lead singer during those years.)

The best tracks here are One of Slim's best-known songs, "Mother Earth" -- much more upbeat than other versions I've heard him do -- and "Paris" an snazzy little ode to his adopted home. (He moved there in 1962 and would die there in 1988.)

Now I've got to get my hands on Gates On the Heat, Canned Heat's album they did with Clarence "Gatemouth" Brown. 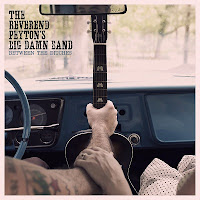 * Between the Ditches by The Reverend Peyton's Big Damn Band. You might think that a trio consisting of a crazy slide guitarist, his wife on the washboard and his cousin playing a bass drum and junkyard percussion might be little more than a fun little novelty act.

But those who have enjoyed the recordings and/or the live shows of The Reverend Peyton’s Big Damn Band, know that this group from rural Indiana goes way beyond the novelty spectrum.

Sound familiar? Yes, I just reviewed this album in Terrell's Tuneup not long ago. Read the whole thing HERE

3 Nancy Sinatra covers (I played these in my Nancy tribute in a recent Terrell's Sound World):

All three are fine tributes in their own peculiar ways. But I still prefer Nancy's originals.