A version of this was published in The Santa Fe New Mexican
Sept. 28, 2012 One of the most exciting CDs I’ve been listening to in recent weeks is The Blanco Sessions, the posthumously released, should-have-been-a-comeback album for rockabilly fireball Janis Martin. It’s an upbeat, generally happy CD, and yet there’s a sad story behind it.

Martin died of lung cancer in 2007, just a few months after she finished recording the album. It was the final raw deal for a woman whose career was full of raw deals. (It’s also a raw deal that it took five years to find a record company to release the album, but that’s another story.)

I’d like to be the first writer to do a piece on Martin without referring to the fact that in the 1950s her record company marketed her as “the Female Elvis.”

I guess I blew that.

That "female Elvis" bunk doesn’t do justice to Martin. It makes her sound like some kind of novelty act. She wasn’t.

True, the Virginia native (who signed to RCA Records in 1956. just months after Elvis did), was an early female practitioner — and one of very few — of rockabilly in her day. And she did have a song called “My Boy Elvis.” But she was very much her own person — an artist with a strong, confident voice.

A dynamic, vivacious performer with a natural rockabilly spunkiness, Martin might have achieved a long and productive career as a singer.

But at the age of 16 (15 by some accounts), she secretly married her boyfriend. And by the age of 17, after she got pregnant, she could no longer keep it a secret. RCA couldn't handle the potential scandal (remember, this was the late ’50s), so the company dropped the pregnant teenage rockabilly.  It’s strange, but one of the first songs she recorded for RCA was one called “Let’s Elope Baby.”

An overly cautious and conservative record label was her first professional roadblock. Her second was her second husband, who hated being on the road so much in the early ’60s he gave Martin an ultimatum — your music career or your marriage. She chose the marriage and put a lid on the music for the rest of the time she was married to him — 13 years.

This album, lovingly produced by modern rockabilly singer and longtime Martin fan Rosie Flores, is something of an unintentional farewell letter from Martin. It wasn't the first time the two worked together. Martin contributed her vocals on a couple of songs on 1995’s Rockabilly Filly (Flores’ best album) — as did fellow rockabilly matriarch Wanda Jackson.

When Martin and Flores worked on The Blanco Sessions — recorded in April 2007 in Blanco, Texas — Martin had not yet been diagnosed with cancer. The illness certainly didn’t show in her voice, which sounded just as powerful as, though more mature and somewhat husker, than it did in her girlhood days.

Flores made no noticeable effort to modernize or force her own stamp on Martin’s basic sound, as producer Jack White did on Jackson’s recent album The Party Ain’t Over. There are no Amy Winehouse songs and no fancy studio tricks here. Flores just gathered a handful of capable Texas musicians and let the music rip, with Martin clearly out front.

The songs include a couple of tunes associated with Jerry Lee Lewis. There’s “Wild One (Real Wild Child),” originally recorded by Aussiebilly Johnny O’Keefe. But even better is “It’ll Be Me,” a classic, if under- appreciated, Jerry Lee B-side written by Cowboy Jack Clement. Martin delivers with fire.

She also performs some lesser-known rockabilly and neo-rockabilly tunes like “I Believe What You Say” (a minor hit for Ricky Nelson written by Johnny and Dorsey Burnette); “Find Out What’s Happening,” an Elvis song from the early ’70s; Ronnie Dawson’s “Wham Bam Jam”; and The Blasters’ 1983 ode to Hank Williams, “Long White Cadillac.”

Like most of her peers, beginning in her teen years, Martin was a fan of rhythm and blues. She kicks off this album with a billyed-up version of a Ruth Brown song “As Long as I’m Movin’.” She also covers “Roll Around Rockin’,” a lusty blues song by Carolina Beach Music master Billy Scott.

Martin’s roots are in country music, however. In the 50s, she toured with the likes of Hank Snow, Jim Reeves, and Faron Young. Among the country songs here are a soulful take on Patsy Cline’s “Sweet Dreams.” It doesn’t quite match the intensity of Cline’s classic original, but it’s a worthy try.

On the other hand, I’d match Martin’s upbeat, rocking take on Don Gibson’s “Oh Lonesome Me” against any version of that much-covered tune. (Let’s start a needless argument: the worst version of “Oh Lonesome Me” is Neil Young’s dreary take on his After the Gold Rush album. Talk among yourselves.)

In interviews, Flores has said that she believes Martin realized this would be her last album. It’s a fitting goodbye from a rock pioneer, rocking until the very end. 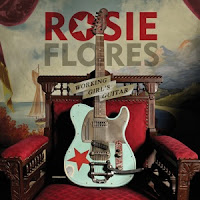 * Working Girl’s Guitar by Rosie Flores. On the heels of The Blanco Sessions finally seeing the light of day, Flores will be releasing her latest album (coming Oct. 16), which as always is full of delights.

Although she has helped carry the rockabilly torch — and this work features a bang-up version of “Drugstore Rock ‘n’ Roll,” an early hit for Janis Martin, and a fresh take on Elvis’ “Too Much” — Working Girl’s Guitar isn’t a pure rockabilly album. Most of the CD is good basic roots rock, and it includes a tasty instrumental, “Surf Demon #5.”

One of the highlights here is Flores’ duet with former teen idol Bobby Vee (you read that right — Bobby Vee!); it’s a sweet ’50’s-style ballad called “Love Must Have Passed Me By.”

Another cool surprise is Flores’ arrangement of George Harrison’s “While My Guitar Gently Weeps.” She does it jazzy, with a stand-up bass and soft acoustic guitar solos, subtly showing off her chops on the instrument.
at September 28, 2012