A version of this was published in The Santa Fe New Mexican
Nov. 2, 2012

Let’s get right to the point: Mighty Lonesome Man by James “Slim” Hand is the best county album of the year. The best basic old-fashioned, honest-to-God heartache and honky-tonk country music of the year. Maybe in the last several years. 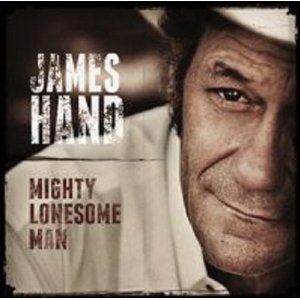 Do I make myself clear?

I’d never heard of him until earlier this year, when I went to a show at the Austin Moose Lodge — an official meeting place of the Loyal Order of Moose — during South by Southwest.

While I was watching a young “underground country” band called Hellbound Glory, a guy about my age wearing a cowboy hat and a spiffy Western-cut jacket came up to me and introduced himself. He was working the crowd, greeting individuals before his own impressive set that night. While on stage, he said he wanted to shake the hands of everyone in the audience.

The soft-spoken singer seemed sincere, not smarmy. So maybe I shouldn’t be surprised that his new album seems like an old friend. Sounds corny, I know, but I wouldn’t say it if it weren’t true.

Hand was raised in Tokio, Texas, a tiny town near Waco, the son of a rodeo rider. (Hand himself is a horse trainer by profession.) He has been singing all his life and wrote his first song when he was 15. He recorded several albums on small labels and one, The Truth Will Set You Free, on a major minor label, Rounder, in 2006. That was his first brush with national fame. He even got interviewed on NPR’s Fresh Air. In my book, he ought to be a lot more famous.

On Mighty Lonesome Man, Hand is backed by a bunch of impressive Texas musicians — Cindy Cashdollar on steel guitar, Alvin Crow on fiddle, and Earl Poole Ball on piano all make appearances. And on every song, Will Indian plays electric guitar and Speedy Sparks — best known for his work with Doug Sahm and the Texas Tornadoes — plays bass. Sparks was in Hand’s band when I saw him at the Moose Lodge.

But even more impressive are the songs, all originals except for a cover of Johnny Cash’s “Get Rhythm.” The album starts out with the title tune, a nonflinching account of the lonesome life. “I know what it’s like when night starts fallin’/And God above won’t even raise his hand/And I know what sorrow steals when I start crawlin’/And I know ‘cause I’m a mighty lonesome man.”

Another song dealing with the same subject is “Lesson in Depression,” in which Hand sings, “Thanks for droppin’ by, but you don’t need to see/What I do when I get sick and tired of me.”

Many have compared Hand’s music to that of Hank Williams and fellow Texan Lefty Frizzell. But the voice that comes to mind when I hear this song and “Mighty Lonesome Man” is that of the late Gary Stewart, whose hits “Drinkin’ Thing” and “She’s Actin’ Single (I’m Drinkin’ Doubles)” were some of the starkest, most moving sounds on country radio in the mid-’70s. Hand’s voice has that haunting Stewart quiver.

“My Witness” has all the marks of a classic honky-tonk weeper. The steel and fiddle set the mood (Bobby Flores plays both on this track). The “witness” is some barroom chippy, while “my judge and jury” is apparently the singer’s wife, sleeping in a house down the street.

Hand has a talent for story songs. “The Drought” is a tale of a farmer watching his land go dry. “I see the tracks of baby quail/Fallen cracks along the trail/And I know like them, the earth will swallow me/But before I give up, I’ll haul water in a coffee cup/From the pits of hell or the deepest darkest sea.”

Then there’s “Old Man Henry,” the tale of another old farmer who refuses to sell his land to the government for a road project. “In his 97th year/Old man Henry had made it clear/They could build their damned highway somewhere else/He wasn’t about to go.” This story doesn’t end happily.

The themes and situations Hand sings about and the simple music with which he conveys them are not groundbreaking or innovative. They are just honest songs that prove that old-school country can still sound fresh and that mighty lonesome men can still make mighty powerful music.

* Goin’ Down Rockin’: The Last Recordings by Waylon Jennings. Jennings died in 2002. A couple of years before his departure, he recorded a bunch of basic tracks in the home studio of his friend Robby Turner.

These recordings, mostly songs he wrote himself, just feature Jenning’s voice and guitar and Turner’s bass. Nearly 10 years after Jennings’ death, Turner gathered some of Jennings’ old sidemen, including drummer Richie Albright and guitarist/keyboardist Jim “Moose” Brown, to make this album. I was skeptical when I first heard about about this project. It could have turned out cheesy and exploitative. Fortunately, it didn’t.

As the title song suggests, there are some good country rockers here, including the title song, “If My Harley Was Runnin’ ” and “Sad Songs and Waltzes,” which is neither (and it’s also not the Willie Nelson song of the same title). However, “She Was No Good for Me” is indeed a sad song and a waltz. This is one of my favorite songs Jennings did in his later years.

Another latter-day Waylon favorite is “I Do Believe,” originally appearing on a mid-’90s album by the outlaw supergroup The Highwaymen. It’s a moving statement of humanist spiritually that starts out: “In my own way I’m a believer, in my own way right or wrong/I don’t talk too much about it/Something I keep working on.”

Here he rejects the hellfire sermons of a preacher and “voices I can’t hear” while embracing his inner spirit and praising a “loving father, one I never have to fear.”

This album might not stand up to Honky-Tonk Heroes and Lonesome On’ry, and Mean, but it’s a proper, if belated, goodbye from a giant who left us too soon
at November 02, 2012