A version of this was published in The Santa Fe New Mexican
Nov. 9 2012

Here’s some good news for all you Frank-o-philes: After being off the shelves for several years, some 60 albums by the Father of Freakout are being rereleased.

Following an ugly legal struggle with Rykodisc, the company that rereleased Frank Zappa’s stuff in the ’90s (have I told you lately how much I hate the music industry?), the Zappa Family Trust has won back the rights to Daddy Frank’s wondrous catalog. And now, Universal Music is rereleasing all this crazy music to a world that doesn’t deserve it.

Don’t go looking for bonus tracks — rarities, demos, unreleased live material, or whatever. Basically, these are straight-up reissues. Most devotees probably already have the bulk of Zappa’s albums. But he was so prolific — nobody but zealots and completists have all of his stuff. Sometimes he would release several albums a year. 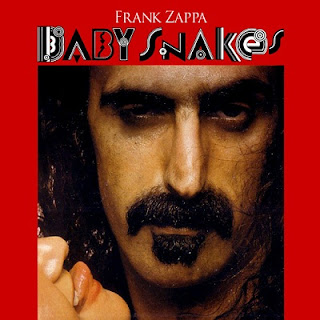 I’ve been a Zappa fan since the late ’60s, but there are lots of Zappa albums that somehow passed me by through the years. So this is a good time to catch up.

* Baby Snakes. Originally released in 1983, most the songs were recorded live in New York in 1977 (the one exception is “Baby Snakes,” which had appeared on Sheik Yerbouti).

This record is a soundtrack album for a concert video of the same name. From what we can hear on Baby Snakes, it was a good, if not great, show with a classic lineup that included guitarist Adrian Belew, drummer Terry Bozzio, and keyboardist Tommy Mars.

The inclusion of “Disco Boy,” in which Zappa rips into the disco scene with the same glee he once ripped into hippies, dates the music, but it’s a fun little artifact.

About two thirds of this album consists of three lengthy examples of Zappa’s scatological comedy-rock. There’s a rather rote “Dinah Moe Humm,” in which Zappa zips through the lyrics as if he’s sick of reciting them; “Titties and Beer,” which features a so-stupid-it’s-funny dialogue between Zappa as a biker and Bozzio portraying Satan; and the 11-minute “Punky’s Whips,” which deals with Bozzio’s supposed homoerotic attraction to a now forgotten singer named Punky Meadows (from a now-forgotten band called Angel). 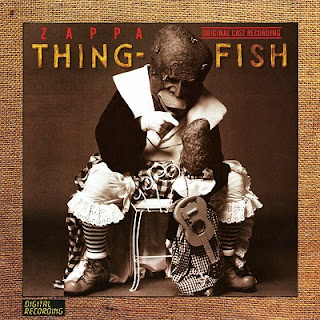 * Thing-Fish. The Allmusic Guide describes this 1984 double album as Zappa’s “most controversial, misunderstood, overlooked album.” And when you’re talking about Zappa, that really is saying something. The songs are from a musical — which never made it to Broadway, for which it was intended — about a bizarre Tuskegee-like experiment by the government that goes awry and ends up turning black people into strange creatures with potato heads, duck bills, and enormous hands.

Ike Willis, who was part of Zappa’s Mothers during this era, performs the spoken-word narration for most of the songs. In the character of “Thing-Fish,” Willis basically does it in the dialect employed by “Kingfish” from Amos ‘n’ Andy.

There’s also a yuppie couple: Harry, who comes out as gay, and Rhonda, a briefcase fetishist. The couple is played by Terry Bozzio and his wife Dale Bozzio, who at the time was fronting the popular Los Angeles New Wave group Missing Persons.

Like the Joe’s Garage saga, the narration often gets in the way of the music — and you’ll probably enjoy Thing-Fish more if you just get lost in the music and don’t try to follow the plot.

It’s an interesting if not crucial latter-day Zappa work. Every now and then a familiar Zappa song pops up. You’ll hear rerecorded songs like “The Torture Never Stops” (here called “The ‘Torchum’ Never Stops”), “You Are What You Is,” “Mudd Club,” “The Meek Shall Inherit Nothing,” and “Ms. Pinky” from Zoot Allures, reimagined here as “Artificial Rhonda.” One redeeming treat is “Brown Moses,” which features vocals by blues/funk great Johnny “Guitar” Watson. 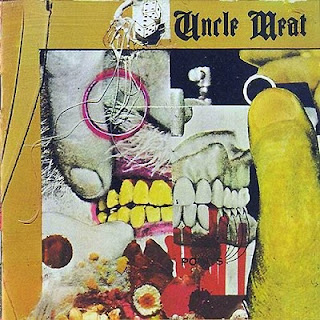 * Uncle Meat: For some reason I never broke down and bought this album when it came out in 1969.

Maybe I spent all my Zappa budget on We’re Only in It for the Money and Cruising With Ruben & The Jets — and before I knew it, there were new Zappa albums like Hot Rats, Burnt Weeny Sandwich, and Weasels Ripped My Flesh to distract a youthful consumer.

Whatever the case, Uncle Meat is a masterpiece. It’s essential Zappa listening.

For 40-plus years I’ve considered We’re Only in It for the Money as the definitive Zappa record, and I’d still be predisposed to choose that one if you put a weasel to my head.

But with Money you have to be careful which version you get (beware of the controversial 1986 version, remixed by Zappa himself, with a new rhythm section and stuck on a CD with the entire Lumpy Gravy album tacked on).

And listening again to Uncle Meat, I realize that this album ranks up there too.

This sprawling work started out a a double LP — supposedly it’s a soundtrack to a very obscure Zappa movie that didn’t get finished until a decade later and exists now on VHS tape. (I don’t think it was ever released in theaters, at least not in this dimension.)

There’s just about everything a Zappa fan could want: snatches of freeform jazz, including “Ian Underwood Whips It Out” and several versions of “King Kong”; contemporary classical interludes; greasy, sleazy Munchkin doo-wop like “Electric Aunt Jemima” and “The Air”; unclassifiable instrumentals like the strangely beautiful “Nine Types of Industrial Pollution”; bizarre spoken dialogue including a short message from the infamous Suzy Creamcheese and an argument between Zappa and drummer Jimmy Carl Black (a former New Mexico resident) complaining about not making enough money; and throwaway renditions of “God Bless America” and “Louie Louie.”

Some of Zappa’s classic tunes are here — the dirgelike “Mr. Green Genes,” in which advice to “eat your greens” somehow evolves into “eat your shoes.” And there’s “Dog Breath in the Year of Plague,” a pachuco love song to a girl who helps the narrator steal hubcaps and stay wasted all the time.

One deadly misstep here: on disc two there’s a 37-minute chunk of dialogue from the movie that messes with the otherwise flawless flow.

Hey! I just learned that Frank's son Dweezil will be bringing his "Zappa Plays Zappa" tour to Albuquerque next month. Should be fun. 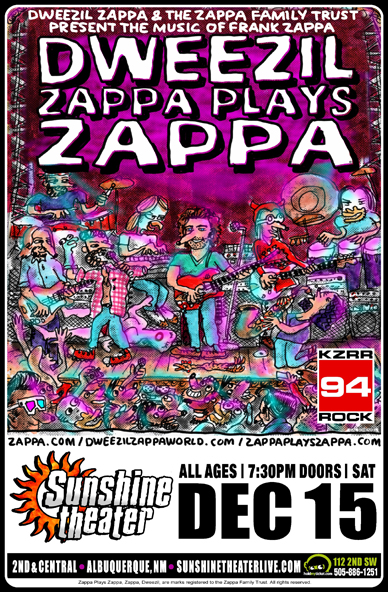