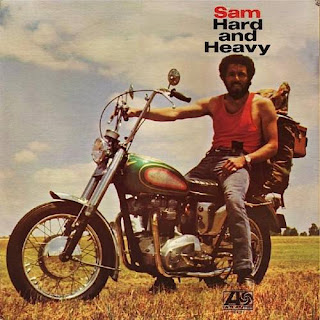 * Sam Hard and Heavy by Sam Samudio. His real name is Domingo Samudio, but you probably know him best as Sam the Sham, the voice of "Wooly Bully," "Ju Ju Hand" and (even though it's my least favorite Sam the Sham & The Pharoahs hit), "Little Red Riding Hood." Sam was a Chicano-rock icon, a garage-rock pioneer, who, with The Pharoahs blended a Tex-Mex sensibility with Memphis soul.

Hard and Heavy was Sam's attempt in 1970 to establish himself as a serious solo artist. He was picked up by Atlantic Records, which brought in producer Tom Dowd (who'd just produced major records by The Allman Brothers and Derek & The Dominos) and hired musicians including  Duane Allman, Jim Dickinson with his band The Dixie Flyers, The Memphis Horns and even The Sweet Inspirations (Elvis' background singers) for this record.

For those of us who actually bought Sam the Sham albums in the '60s, the musical direction of Sam Hard and Heavy shouldn't be a surprise. Before I actually heard it, I was afraid it woulds be an overstuffed early '70s supergroup fustercluck. It's not.

There's several covers of familiar songs here. -- It's hard to screw up "Lonely Avenue,"  but even harder to make it sound truly fresh. But Samudio aided by The Sweet Inspirations bring out the hidden joy inside this Doc Pomus classic.

Wisely, Samudio's take on "Key to the Highway" doesn't sound like Derek & The Domino's more familiar version. There's a repetivie grating guitar lick and a cool electric organ bouncing off the rest of the band. I'm not sure who's playing the harmonica, but it works.

The best songs here are the longer jams where sam and band get to stretch out. there's John Lee Hooker's "Goin' Upstairs," performed as a Canned  Heat-style boogie. Even better is the urgent, hard-driving "15 Degrees Capricorn Asc." Despite it's goopy hippie mystic title, this is one tough slab of rock 'n' roll. "Come on, push! Come on, work!" Sam commands as the organ, guitar and horns battle it out.

There's a couple of cuts that aren't so "hard and heavy," but are tasty treats. The acoustic cover of Randy Newman's "Let's Burn Down the Corn Field' is soulful and spooky. And the country/conjunto of "Don't Put Me On" is irresistible.

My only complaint here is that a bonus track that appeared on some reissues of Sam Hard and Heavy -- a cover of "Me and Bobby McGee" featuring Duane Allman -- didn't make the eMusic version. Otherwise, this album is a real treasure.

(All Sam the Sham fans should read this wonderful 1999 interview in Salon.) 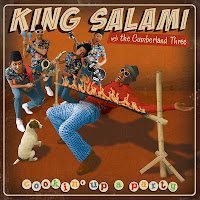 I'll leave that mystery to the numerologists. All that matters is that on this, their second full-length album, the King and his men continue on as one of the best party bands coming out of the British Isles in who knows how long. Admitted devotees of Barrence Whitfield & The Savages, Salami and crew specialize in a frantic, early R&B-infused sound.

Every dang tune here is a moneymaker-shaker. "Monkey Beat" features crazy bongos; "Yosemite Sam" is a spirited tribute to one of the real heroes of the wild west; "Howlin' for My Woman" could wear you out just listening to it.

All those songs are originals. but King Salami does a decent cover of Louis Prima's "She's a Kukamunga." 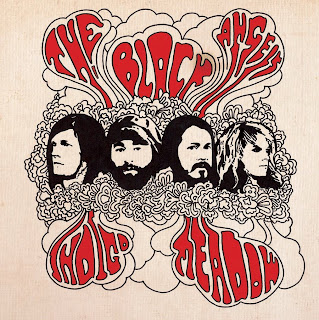 Granted, on its new album, the Austin band certainly employs some sonic tricks from the psychedelic era: lots of reverb, lots of fuzz, some Mideastern/East Indian-sounding guitar licks and melody lines here and there, creepy electric organ — and in a couple of places you’ll hear that electric jug sound pioneered by the Angels’ Texas forebears, The 13th Floor Elevators.

The band’s music is strong enough that it doesn't seem defined by these musical embellishments. ...

Sound familiar? I reviewed this in Terrell's Tuneup not long ago.

* Egyptian Rats by The Paint Fumes. This is a 3-song EP from garage-punk trio from Charlotte, N.C. They were one of my favorite bands I'd never heard of before off the new (free) Slovenly Records sampler. They make The Black Lips sound like The Jefferson Starship.

* "Bluebird" by Leon Russell. Just a song I've loved since it came out in the mid '70s.