A version of this was published in The Santa Fe New Mexican
May 10, 2013


One of the most remarkable rock ’n’ roll comeback stories in recent years is that of James Williamson, who was best known — really, only known — as the guitarist for Iggy & The Stooges on Raw Power, their last studio album to be released (in 1973) before the group broke up. A few years later, Williamson quit the music industry altogether, went to college, and started a career in Silicon Valley, retiring a couple of years ago as a vice president of technology standards for Sony Electronics. 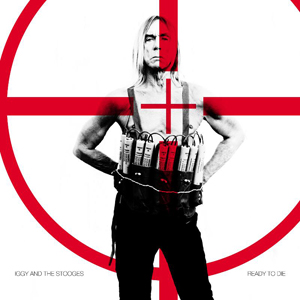 But in 2010, Williamson rejoined The Stooges for the first time since the Metallic K.O. days, and now, on Ready to Die, Williamson and Iggy are creating new music together. The two co-wrote every song on the album.

This is the second album by the reconstituted 21st-century Stooges. The first was 2007’s The Weirdness, in which the brothers Asheton — Ron and drummer Scott — reunited with Iggy, with Mike Watt (the Minutemen, Firehose) on bass. The critical consensus was that the album was a disaster and a disgrace to the Stooge legacy. Personally, I didn’t think it was that bad. Heck, it was a lot better that the latest album by the re-formed New York Dolls.


But Ready to Die is surprisingly good. Young whippersnappers might smirk that it's old-man rock. Well, it’s true. The band clearly was acknowledging this fact with a defiant chuckle in choosing the title for this record. The truth is, these are old men who can rock. And the image of a stern, shirtless Iggy on the cover wearing a suicide belt of explosives suggests these are geezers with attitude.

Maybe the music here isn’t blazing new trails like the original Stooges did in the late ’60s and early ’70s. But, with drummer Asheton and bassist Watt providing an invincible rhythm section and old Stooge sax man Steve Mackay back in the fold, this band frightens most younger competitors.

The Stooges come out of the chute like a crazy rodeo bull on the opening track “Burn.” This is followed by the equally scorching “Sex & Money,” (“A darkness is on my mind/When reason is going blind … I’m looking for a reason to live/ When I’ve only got but two things to give,” Iggy growls.” This is followed by a couple of reckless rockers in which the lyrics look outward at contemporary society. “Job” is about underemployment (“I’ve got a job but it don’t pay [excrement]/ I’ve got a job but I’m sick of it,’ Iggy spits.

Then on ‘“Gun,” Iggy sings “If I had a fucking gun, I could shoot at everyone.” As the song progresses, Iggy takes aim at “Stand your Ground” laws and the place of guns in the American psyche: “Yeah, we killed the Indians … Watch out for the Mexicans … Now it’s time to duke it out, nuke it out, and black it out …”

Later in the album, there is “Dirty Deal,” a cold-eyed indictment of con men in the music industry. (“The system’s rigged to favor crooks/You won’t find that in civics books.” Iggy snarls.) But don’t worry. It’s not all grim politics here, as Iggy and crew prove on “DD’s,” a lusty ode to top-heavy women. It’s shamelessly dumb, but it’s the most lighthearted song on the album.

Not all the songs are crunching rockers. There are three tunes where The Stooges slow it down and pretty it up. Something tells me I’ll tend to push the skip button on these in the future.

However, the final cut is more than worthwhile. “The Departed” is a sad eulogy for Asheton. As part of the tribute, the song starts and ends with acoustic versions of Ron’s famous “Now I Wanna Be Your Dog” guitar riff. The song is a sober look at the rock ‘n’ roll life: “The life of the party’s gone/The guests who still remain/Know they’ve stayed a little too long/Party girls will soon get old/Party boys will lie/Both the sexes soon grow cold.”

There’s truth in these words. But despite their advancing years, I just can’t look at Iggy & the Stooges as guests who have stayed too long.

* TV Smashing Concert, July 23, 1970 by Figures of Light. I never like to quote record companies hyping their own products. But I have to make an exception here, because Miriam Linna of Norton Records hit the nail on the head. According to the band’s bio on Amazon.com, she told the band this LP “makes Metal Machine Music sound like Mantovani.”

Of course, she meant that in the nicest possible way. Meanwhile, the blurb for this record on Norton’s website says “be aware that the vocals are buried in the original mix.” Actually it sounds more like the vocals were cremated. I mean that nicely also. 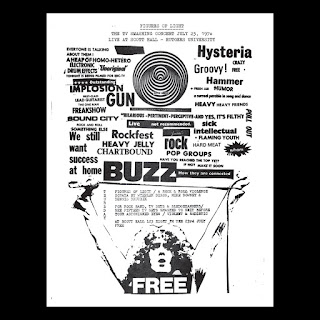 Who is this band? Quick recap: They came from New York City, influenced by The Velvet Underground and other pre-punk, post-garage acts of that era. At their first concert in 1970, the group destroyed 15 television sets onstage at Rutgers University.

They broke up soon after that, went their separate ways, and the Figures were just a flicker of a memory until the Norton Records crew discovered an ancient 45 of FOL’s only single, “It’s Lame,” and persuaded singer Wheeler Winston Dixon and guitarist Michael Downey to reunite and get back in the studio.

No, the fi ain’t hi on this live album, and I staunchly believe that any potential new converts to the Figures cult should start out with their previous albums, 2008’s Smash Hits, which includes old material from the ’70s, live stuff, and songs recorded in the studio shortly its release, and the excellent follow-up, 2012’s Drop Dead.

But TV Smashing Concert —the group’s complete debut show, all 26 minutes or so — will have a damn-I wish-I’d-have-been-there effect on those who already are fans of the Figures. At least it did on me.

The album is available only in a limited edition of 300 colored vinyl LPs. To paraphrase the Firesign Theatre, if you asked for this record in stores, they’d think you were crazy. But you can find it at Norton Records.

BLOG BONUS: My radio interview with Wheeler and Michael of  Figures of Light is below