A version of this was published in The Santa Fe New Mexican
May 24, 2013 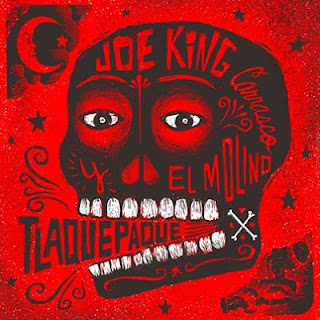 But before there were The Crowns, there was El Molino, a band Carrasco founded in the mid-1970s. El Molino, at least most of the time, didn’t have that frantic hopped-up beat that characterized The Crowns.

Made up primarily of old Doug Sahm sidemen, including San Antonio sax star Rocky Morales, the band was more down-to-earth than The Crowns, with a sound you might hear in some barrio bar in San Antonio, bringing a Tex-Mex feel to R & B, soul, blues, greasy ’50s ballads, and ’60s garage rock.

And now, after 35 years or so, Carrasco, with a reconstituted El Molino, is back with a new album, Tlaquepaque.

Following last year’s reunion of the original Crowns — they recorded a fun album called Que Wow and went on tour, with a great free show at the Plaza bandstand last year — Carrasco went back to the studio with original Molino members Speedy Sparks (bass) and Ernie “Murph” Durawa (drums). According to Carrasco’s website, the idea was just to record a couple of songs, including one for a benefit Christmas album for the Health Alliance for Austin Musicians (a novelty tune called “Tamale Christmas”).

However, the collaboration of the old compadres led to a bigger project. Many of the original members of El Molino have gone up to that great cantina in the sky, and a bunch of fine Texas musicians dropped into the studio to help out.

These included guitarists John X Reed and Jesse Dayton (a honky-tonk hero in his own right), sax man Joe Morales (no relation to Rocky, who died in 2006), and Texas keyboard deity Augie Meyers, whose distinct electric-organ sound helped create the sound of the Sir Douglas Quintet and the Texas Tornados. Meyers reportedly did a brief stint with the original El Molino.

For fans of the Crowns’ manic sound, hearing this somewhat more laid-back Carrasco shouldn’t be much of an adjustment. The opening track, the title song, sounds like The Crowns with a sweet saxophone added. There’s even a new all Mexed-up version of Carrasco’s signature song “Buena” here.

Showcasing this band’s diverse influences are “I Saw My Baby,” which answers the question “What would `Who’s Been Talkin’” have sounded like had Howlin’ Wolf been born in San Antonio?”; “Make Believe Kisses,” which has a country-western feel; “Ayudame Lupe,” with its pronounced debt to Chuck Berry; “Tell Me,” which features echoes of New Orleans; and the smoldering cumbia “Mas Mas,” which should make Los Lobos jealous.

Right now I have two favorites on this album. There’s the ’50s-soaked slow dance “Anna.” No, it’s not the Arthur Alexander classic of the same title, but the two songs would sound great side by side. The absolute best song on Tlaquepaque is the ranchero-flavored “Donna, Do Ya Wanna.” There is a guitar riff very similar to that on Eddie Dimas’ “El Mosquito,” and the refrain, “Donna, Donna, Donna, Donna, do ya wanna?” reminds me of Frank Zappa’s conversation with Flora and Fauna in “Dinah-Moe Humm.”

I don’t think Carrasco, who has lived in Puerto Vallarta, Mexico, for a decade or two, will be touring anytime soon with the reconstituted El Molino. So it’s good to have this document of this worthwhile band. 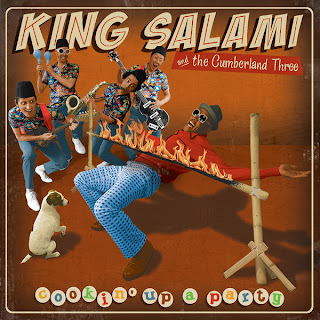 * Cookin’ Up a Party by King Salami & the Cumberland Three. Here’s another “king” who specializes in good-time rock ’n’ roll with heavy old-school R & B overtones. King Salami — who reportedly once went by the name “Prince Chipolata” — and his Cumberlands continue as one of the best party bands to come out of the British Isles in who knows how long.

This is the group’s second full-length album, following 2010’s Fourteen Blazin’ Bangers! They cook up 14 more blazin’ bangers on this year’s outing. And every dang one of them is a moneymaker-shaker.

“Monkey Beat” features crazy bongos; “Yosemite Sam” is a spirited tribute to the original Red Headed Stranger; “It’s All Your Fault” sounds like a lost Jimmy Reed song; “She’s a Kukamunga” is a wild take on an old Louie Prima tune; and “Howlin’ for My Woman” could wear you out just listening to it.

Now here’s a mystery to ponder. The band’s always been called the Cumberland Three, but the album cover clearly shows four guys beside King Salami. Who’s going under a flaming limbo bar? As the late Jonathan Winters might have said, “Where’s the other two?”

Here's one from the original '70s El Molino


And here's a 40-minute set by King Salami