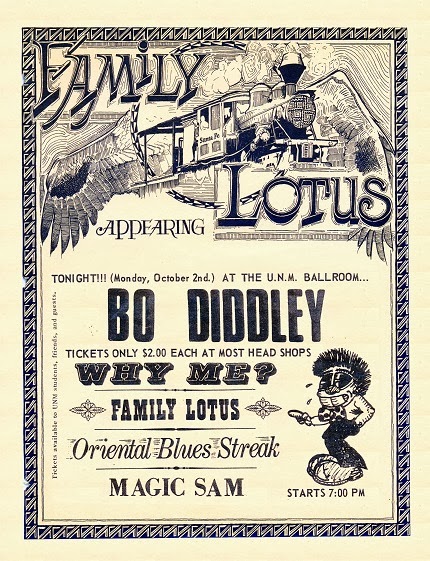 Back in late August, 1971, the week I moved to Albuquerque to attend the University of New Mexico, I saw a poster, very similar to the one above, advertising the "Second Annual King Kong Memorial Stomp" starring Bo Diddley and a Santa Fe band called Family Lotus at the Student Union Building Ballroom. I went to the show to see Bo, and, of course, he was fantastic. (He was living down in Los Lunas, N.M. at the time.)

But that night I became a fan of Family Lotus. They looked like a bunch of Cerrillos hippies -- and there was good reason for that. They had a happy aura of hillbilly anarchy about them onstage. But they actually could play and sing. And they did mostly, if not all, original songs. Their banjo player Jim Bowie at one point performed what he called a "banjo raga." I was hooked. I tried to catch them every time they played Albuquerque during the next few years.

Years later, when I became a freelance music writer for The Santa Fe Reporter, the other music freelancer there was none other than Lotus-man Jerry Faires. I always felt honored to be sharing a stage with him -- even though that "stage" was a newspaper.

Faires, Bowie and other members of the Family Lotus family are reuniting for an appearance this Saturday at Joe West's Psychedelic Folk & Bluegrass Festival in Madrid this Saturday. The show, which will be in a tent outside the Mineshaft Tavern starts at noon. Here's the schedule:

NOON Joe's Opening speech (Will he announce that he's running for governor?) 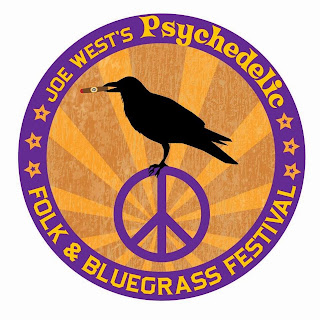 Tickets are $10 in advance (available at The Mineshaft and The Candyman) and $15 on the day of the show.

Joe says parking is atrocious in Madrid. "Best to park out above the old ball park and walk into town."
at October 10, 2013